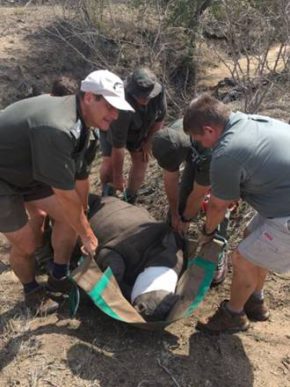 For the General Manager, Louis Strauss and Rangers, this was a clear indication that the Mother was dead. A carcass was later found, which was suspected to be the Mother, killed by poachers for her horns. The Regional Section Ranger of the Kruger National Park was contacted and within 30 minutes a helicopter with help was on its way. The small calf was darted and airlifted to the Care for Wild Rhino Sanctuary close to the Kruger National Park. There was a great team effort by everyone that was involved to ensure that this little one has a fighting chance.

Comments General Manger, Jock Safari Lodge, Louis Strauss: “In these desperate times every rhino’s life that we can save will contribute to the success of the rhinos. Young rhino that lose their Mothers will only survive a night or two in the wild before being killed by lion or hyena. The Care for Wild Rhino Sanctuary named her “Jemu”, after our Team that found and helped save her. Updates will be posted via social media.”