Petite and beautiful, YAEL so impressed Richard Loring with her crystal-clear, powerful classically- trained voice that he took her on as his first protégé, mentoring her over 18 months to produce her debut album, ‘Fly Away’, which was launched on 13 November. 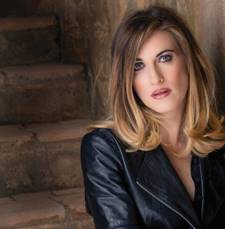 “In my 50 years in the entertainment industry, producing a nurturing talent, I have rarely found a voice so pure and powerful,” says Richard Loring, a Multi Lifetime Achievement Awardee and he himself an award-winning performer on stage, film, TV, cabaret and as a recording artist – in London’s West End and in South Africa.

Loring was particularly captivated by YAEL’s international star quality when he heard her performing ‘crossover’ numbers from classical to pop. He was inspired to draw on his experience to produce a world-class performer in the style of popular ‘crossover’ stars like Katherine Jenkins, Andrea Bocelli, Hayley Westenra and Sarah Brightman, who have made classical performances accessible to the global market.

YAEL’s own story is particularly poignant. Classically trained in piano and voice, YAEL had dreamed of following a career in music. Love came early and she married Dave Benjamin and became mother to two beautiful children. For many women this would have been the end of their dream but, determined and committed, YAEL, encouraged by her family, decided to fund her own album, to ‘Fly Away’ and to follow her dream.

Also with a dream, Jeffrey Wapnick, MD of the property giant, City Property, is spearheading the revival of the Tshwane city centre.

012central, in the hub of Wapnick’s vision of creating an artistic precinct in the city, has been attractively revived to create an expansive atmospheric multi-functional venue – highly desirable for event organisers especially for staging special and, specifically, culturally significant events.

Wapnick says, “012central is the perfect place for discovering something new. It is a place of renewal, of hope and functions on a raw, urban plane dotted with art and greenery. There is no doubt of the sense of scale of 012central, and its uniqueness is the blank canvas it offers event hosts to create something new, something bold, to cross divides.

“We have a long history of supporting young artists to showcase their talent, from sculptors to artists from a variety of backgrounds and the venue was an easy choice to launch the career of such an exciting new talent as YAEL.”

To create an exciting musical juxtaposition, Loring identified the Soweto Spiritual Singers to offer an ideal natural synchronicity with YAEL’s talents. Says Loring, “On several tracks YAEL’s soaring voice contrasts with the rich blend of earthy, African spiritual sounds and gospel rhythms, which are infused with a jazzy saxophone and a hint of African instruments to create a triumphant unifying harmony.”

“I love my country,” says YAEL, “and believe that we South Africans can show the world, currently so torn by racial strife, that tolerance and harmony can be achieved through music.”

Nkululeko Vilakazi of the Sowetan Spiritual Singers explains the dynamics of this unique mix: “The fusion of the Eurocentric sound and African ‘heartbeat’ music produces an unusual and interesting harmony through music creating a universal message of hope.”

In this album, Fly Away, YAEL effortlessly transcends boundaries of culture, race, language and genre through African, European, pop, folk and contemporary music, which blend into one, rich experience. Tracks include those originally written and performed by David Foster, Madonna, Brian May, Mick Jagger, Jon Bon Jovi, Joy, and Albert Hammond. Illustrating the range and languages featured are tracks such as Canto Alla Vita; What are you doing the rest of your life; One day I’ll fly away; Love is; I’ve dreamed of you; Viva La Vida; and Eres Tu, a tour de force finale.

The title of YAEL’s album is in part inspired by the Will Jennings/Joe Sample piece, One day I’ll fly away, written for Randy Crawford around 1980. Fly Away is more than a remarkable crossover success for South Africa; it is the realisation of visionary thinking that rings universally in the lyrics of Will Jennings: “Leave all this to yesterday. Why live life from dream to dream and dread the day when dreaming ends?”