The Garden Route National Park (GRNP) is celebrating the boost in increased awareness of coastal National Parks. By awarding a marine biologist, SANParks has acknowledged sea life is as important as game parks. Threats facing marine life are real and include pollution, unsustainable fishing, climate change, unsustainable means of extracting resources such as oil & gas. 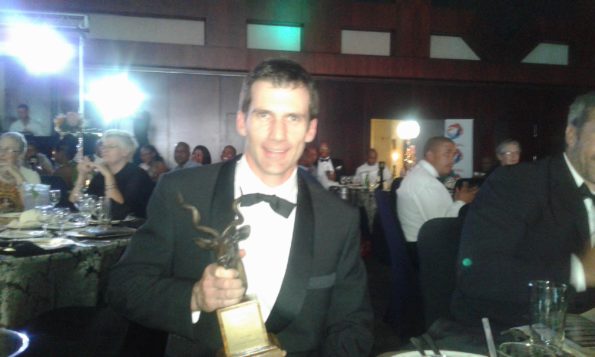 Kyle Smith, one of a few marine ecologists based in the Garden Route National Park received an Award on the 18th November 2016 for his excellent performance in the workplace. The award was handed over by the CEO of SANParks, Mr Fundisile Mketeni. The South African Coastline is exposed to strong wave action and it has relatively fewer sheltered bays (according to Branch & Branch 1981). Kyle appears reserved and introverted but enjoys working in rocky shores and the rugged coastline of the Garden Route. 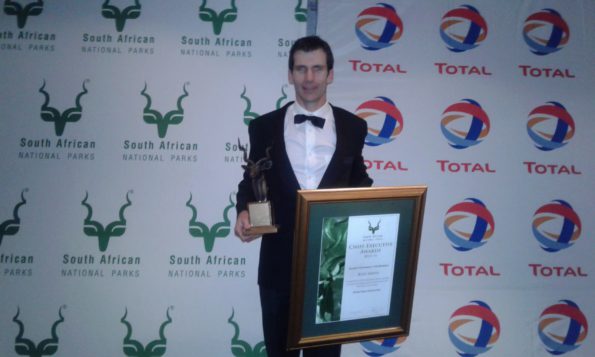 According to the State of Knowledge Report (2015), ‘inshore coastal upwelling is often driven by south-easterly winds and can have a marked effect on both the nutrients and temperature of surface water, as well as recruitment of intertidal invertebrate larvae to the shore.’

During 2015 and 2016, Kyle had a very busy year conducting marine research for planning purposes in the Garden Route. In addition to his work, he took on additional research projects previously undertaken by senior scientists. He has not let budgetary constraints hamper his enthusiasm. Dr. Ian Russel, his immediate supervisor says Kyle always delivers professional, high quality and innovative work.  He adds ‘in 2015 Kyle was the top producer of scientific publications in the Garden Route Node.’

Kyle won the Award for undertaking duties outside of his own Key Performance Areas (KPAs) to ensure the organization met its objectives.

‘I am grateful for the Award and was tempted to grab the microphone to request the Award be shared with colleagues, rangers, civil society, communities in the area’ says Kyle humbly. We surprised Kyle by not even telling him he was nominated. We told him he was representing the Garden Route’s scientists and he agreed to attend with his wife Matty.