On Thursday 24 November a gathering of women in Midrand will be the first to take a symbolic stand against human trafficking in South Africa with the media launch of a powerful 16 Days of Activism campaign. At the annual 1000Women1Voice luncheon in Midrand the focus this year will not only be on domestic violence, but on a far more insidious form of violence against women and children.

For most people human trafficking evokes dramatic images from thrillers or TV series and not something happening right under their noses. Yet in South Africa human trafficking is a terrible fate for thousands of victims. Many people will be shocked to learn that it is happening daily along the busiest routes in our country.

Vulnerable youth from poor communities along the N1 often fall prey to traffickers who lure them with promises of a better life in big cities. Many labour and sex trafficking victims don’t even know they are victims of a crime. With the Put Your Foot Down Against Human Trafficking initiative the NPO Anex (Activists networking against the exploitation of children) wants to help destitute young people in the Karoo along the N1 route.

In recent years grim details have emerged about the increase in the number of children being abused and trafficked from towns such as Beaufort West, Leeu Gamka and Laingsburg. Anex works tirelessly to prevent trafficking in children and child labour. Anex has joined forces with four NPO’s – Women’sNet, Girl’sNet, 1000 Women’s Trust and Put Your Foot Down – to raise awareness about this tragic situation during 16 Days of Activism starting on 25 November.

With the @PutYourFootDown (@SitJouVoetNeer on Facebook) campaign the aim is to inform the public and to empower vulnerable youth. The Put Your Foot Down initiative was started last year by 15-year old Kara van der Merwe to raise awareness about sexual abuse of children. The organizers will work closely with trucking and transport companies to help address the issue of human trafficking and to encourage truck drivers to make the N1 safe.

In order to find a lasting solution to help victims and vulnerable youth, Anex will open a much needed Child and Youth Centre in Murraysburg in 2017. The Anex house will serve as a safe haven for 40 youth who need temporary care within the Eden Karoo. “There is a great need for alternative care for children whose home circumstances have deteriorated to a point where a court orders them to be taken into care,” says Claudia Burger, programme director of Anex. “At present the closest centre where such vulnerable children from the Eden and Central Karoo district can be accommodated is in George.”
The house in Murraysburg will not only be a shelter for children, but a family resource centre for the whole community, Burger explains. “We want to help parents reconnect with their children in an environment that is friendly and supportive. Murraysburg has one of the poorest communities in the country and there are a lot of broken attachments in families. The best way to help these kids is if we also reach out to their struggling parents, without making them feel inadequate. Everybody comes with their own trauma and in many cases parents simply can’t give children the care they need or provide them with security.”

The Anex house will be furnished in a way that is comfortable and child friendly, but not too far removed from the children’s own circumstances, Burger says. There will be a food garden and various facilities and programmes are envisioned to educate and empower the community. “We will host events that involve parents and the broader community and we will also ask businesses to come on board to support the initiative.”

HOW YOU CAN HELP:

1. TAKE A STAND: Show your support for the PUT YOUR FOOT DOWN AGAINST HUMAN TRAFFICKING campaign on social media. Ask your friends and family to also join in and post a photo of their feet on our Facebook page @Sit Jou Voet Neer.

2. DONATE HOUSEHOLD GOODS TO THE ANEX SAFE HOUSE: For the 16 Days of Activism campaign we’re asking people who travel along the N1 route to help us furnish the safe house for young victims of trafficking and vulnerable youth in Murraysburg. From 6 to 10 December we’ll have an information kiosk at the truck stop in Beaufort West where you can drop off old clothes, toys furniture, curtains, kitchen utensils, linen, pots and pans – anything we can use to make the house a welcoming home for kids in need. You can also take a photo of your feet at the truck stop.

3. SUPPORT OUR RUNNERS ALONG THE N1: On 6 December a group of long distance runners will depart from Rawsonville to run along the N1 route to Beaufort West where they will arrive on 10 December. Watch out for the runners as they stop at towns such as Touwsriver (7 December), Laingsburg (8 December) and Leeu Gamka (9 December) to spread the message about preventing human trafficking. The runners will look for sponsorships to carry the cost of the symbolic journey back to the Karoo heartland from where many people are trafficked to Cape Town.

There are still a few seats available for our 1000Women1Voice luncheon in Johannesburg on Thursday 24 November at 10:00 in in ULP House, 177 Kruger Road in Midrand. Contact Melanie Daniels (info@1000women.co.za / 021 782 881) if you want to buy a ticket. The 1000 Women Trust mobilizes resources to provide access to skills, leadership capacity building and provide seed funding to women-led organisations. 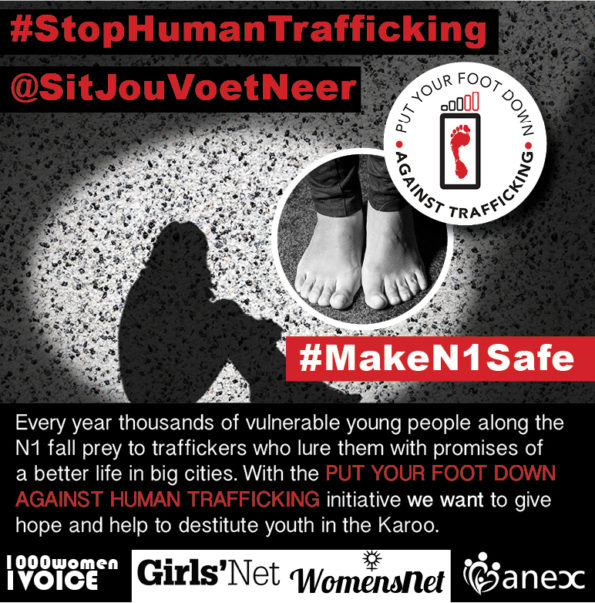