Conventional is not a word that describes Marianne Thamm, a gay feminist, political activist and journalist on the Daily Maverick, where she is assistant editor. 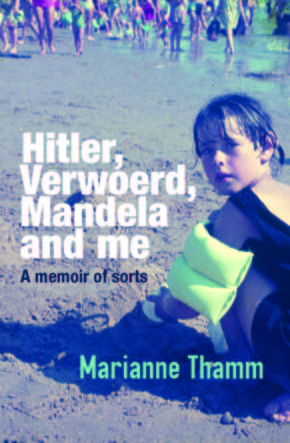 She had a tough childhood, growing up on the other side of the tracks in “Snor City” – Pretoria. Her Portuguese mother, Barbara, worked as a cleaner in England, where she met and married Georg, a Luftwaffe pilot, who was captured at Arnhem and became a prisoner-of-war.

Thamm had a conflicted relationship with her parents, but especially Georg, and she kept questioning him about the choices he made: fighting for Hitler, what he thought about Kristallnacht, when the Nazis murdered German Jews and torched Jewish-owned shops in a two-day orgy of violence, in 1938. Thamm hoped that by getting answers from Georg she could “fix” him and “repair” herself. The story begins at Doves funeral home where her mother’s corpse “lay chilling in a communal mortuary fridge somewhere in the quiet building” and ends with Georg’s death when she finally learns what he may have been trying to teach her: don’t wait for happiness to send you a Whatsapp … go out and be it.

The memoir ranges from her school days to her foray into journalism at the Cape Times before cellphones and computers, to her first trip overseas where she first tasted “freedom” and later when she visited Tante Truta, her father’s sister, in Berlin. Thamm points out: “you’re a woman, you’re gay, you’re an immigrant, pretty far out on the margin … but she “was white which in the 80s was all that mattered”… Her parents were accustomed to their ungovernable daughter so there was no need to tell them anything. It was who she had always been. It was only when Georg befriended a Jewish widow who pointed out to him that Thamm and her partner X, were lesbians, were they outed. Georg appeared to accept it in his typical Teutonic way even though he knew what Hitler did to gays. Especially moving is how a reluctant Thamm and X , after seven years together, became adoptive parents to two black girls, first Layla and then Kenya.

Hitler, Verwoerd, Mandela and Me is about a life well lived. What it was like to grow up as a white ”immigrant” girl in apartheid South Africa and then as a lesbian in a democratic country. It also reflects the turbulent history of South Africa and Thamm, as a journalist, had a ringside view of the passing parade, except when former president,FW de Klerk , made that momentous announcement, she was at the movies doing a review for the Cape Times.

Hitler, Verwoerd, Mandela and Me is lively with touches of self-deprecating humour and lots of existential questions. Autobiographies by their nature are usually without depth or self-analysis. This one is the exception to the rule. Put it on your list of must reads.

However, there are two discordant notes in an otherwise well written and frank look at life.

Thamm doesn’t disclose the names of her partners or lovers and refers to them by initials which is odd, for such a hard-nosed journalist. The title doesn’t have much to do with the three men although they were on the periphery of her life. It reminds me of Spike Milligan’s seven-volume memoir of his war service: Hitler: My Part In His Downfall, his hilarious and outrageous recollections of his war service. The supreme Goon also didn’t have much personal interaction with Hitler either.