Politics is a dirty business if Helen Zille’s autobiography is the yardstick. 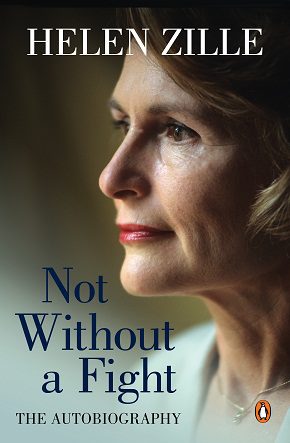 Zille was the leader of the Democratic Alliance (DA), a former mayor of Cape Town and at the time of writing is the premier of the province. Beneath that armour plated skin and apparent prickly nature there is a more gentle side. But you wouldn’t think so by watching her toyi-toyi on stage at election time or telling it like it is in some of her more fiery speeches.

Zille, who entered politics in 1999, stepped into the shoes of the former leader of the opposition, Tony Leon, with whom she didn’t have what you would call a harmonious relationship and she accused him of selling out to the New National Party headed by Marthinus “Kortbroek” van Schalkwyk, who later became tourism minister in the ANC goverment.

In 1994 the Democratic Party (DP) as it was then known had less than 350 000 votes but after she completed her term as leader of the DA in 2014 more than four million citizens had cast their vote for the party. Zille who is a first generation South African of German descent traces her family’s Jewish heritage. Her interest was sparked by survivor Ella Blumenthal, then 93, who was the keynote speaker at the annual Holocaust memorial service at Pinelands cemetery, Cape Town, in May 2015. Zille learned that her father had a Jewish mother and her mother had a Jewish father and with the help of a Cape Town genealogist has traced members of her Jewish family to many corners of the globe, including Argentina.

Zille is at her kindest when writing about her family, two sons, Paul and Thomas and her husband Professor Johann Maree. She recalls her battle with anorexia, (although at the time it didn’t have a name), while she was a student at Wits. Zille started her career as a journalist on the celebrated Rand Daily Mail where Allister Sparks was her mentor. Her take on how she broke the story of Steve Biko’s murder in 1977 at the hands of the apartheid regime makes for riveting reading. But she shows her steel when she writes about her political career. According to the book, it’s not just the ANC which is driven by greed, corruption and factionalism. The DA also has its fair share of conspirators, egoists, back-stabbers and snakes-in-the-grass.

You can read about the rise and fall of Lindiwe Mazibuko, the former poster girl for the DA; the Erasmus Commission of Inquiry which left former Western Cape premier , Ebrahim Rasool, with egg on his face; the celebrated “marriage and then divorce” with the “double-dealing” and haughty Mamphela Ramphele. Of course, the tricky road of negotiating coalition politics which reads like a political thriller with bribery, sexy blondes and the notorious Badih Chabaan, who was at his busiest during the floor crossing periods. And the death of Russian mobster, Yuri Ulianitski who was gunned down late one night in a Milnerton, Cape Town street and his young daughter killed in the shoot-out.

Until now it was little known that Zille was a member of the Black Sash and that she sheltered some of the comrades at her small house in Rondebosch. She also recounts some of her childhood adventures when she was growing up in the then “rural village” of Rivonia, Johannesburg. At the age of nine, defying her mother’s orders, had a sleep-out and with several of her friends, was arrested by the police, on her way home. She writes about her conflicted relationship with her mother and growing up with Carla, her deaf sister, and some of her romantic relationships, most notably with American news reporter, Matt Franjola.

As a former journalist Zille is quite scathing about the media who didn’t always give her a fair deal. She accuses some reporters of being lazy and being used by people who have their own agenda. However, that is her view.

The book is also about Zille the woman and mother: she suffered from post-natal depression twice and she was the head of the governing body of the Grove Primary School who took on the South African Democratic Teachers’ Union over the government’s voluntary retrenchment scheme and the strategy to redeploy teachers through the public school system. Zille is no shrinking violet. She is forthright in her views which many see as arrogance. But she is nothing if not prescient and in Not Without A Fight she predicted the implosion of the liberation party. There are some touches of self-deprecating humour in this highly readable and riveting book. It is 510 pages long with some philosophical questions and a lot of detail. But never boring. And at the heart of it is Zille’s belief that the challenge for South Africa is to build a capable, functioning state and that power has to be checked by competition.