Maria van Harten who lives on the outskirts of Ladismith on Route 62, on a smallholding, writes an advice column for the lovelorn in the Klein Karoo Gazette and she always includes a suitable recipe she hopes will pave the way to a solution to savour. 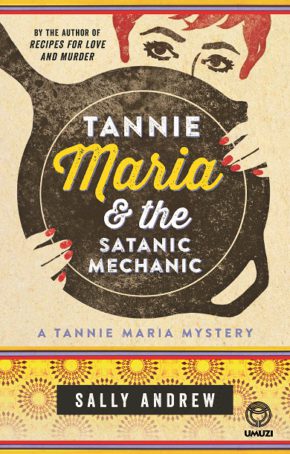 Tannie Maria, as she is fondly known, who is a part-time amateur sleuth, often putting her life in danger, works alongside Jessie, the young investigative reporter and Hattie, the editor and owner of the newspaper who “speaks a Mary Poppins-type English”. Maria made her debut in Recipes for Love and Murder which was published last year when she got involved with Detective Henk Kannemeyer, the town’s handsome policeman, while he was investigating a killing and kidnapping.

Tannie Maria & the Satanic Mechanic centres on the murder of Slimgat Kabbo, the leader of a group of Bushmen who won a land claim and the killing of Tata Radebe, a strugglista. Jessie is chasing up the story of Kabbo who, after receiving death threats, is poisoned at the Klein Karoo Nationale Kunstefees (KKNK) and despite Kannemeyer’s plea to Tannie Maria not to get involved, she does. Maria also seeks guidance from Ricus, the satanic mechanic, who is a counsellor and she hopes his advice will help to heal the trauma she suffered at hands of her abusive late husband. And perhaps open up about her deep, dark secret as the first step towards healing herself. The motley group – Ousies, who leads the cleansing rituals, Fatima, Lemoni, strugglista Tata Radebe and Dirk – who was a prime suspect in Recipes for Love and Murder, meets regularly at Ricus’s farm where he repairs cars. They carry a lot of baggage from the past, as does Ricus himself, and none of them is what they seem to be. While they’re at a counselling session Radebe is murdered and the group’s members including Tannie Maria are the suspects. But police are still looking for Kabbo’s killer. There are numerous threads to this many-layered story which comes to a satisfying and most unexpected climax. The characters are finely drawn and Andrew’s description of the Klein Karoo and a small town, where everybody knows your business, is brilliantly done. There are some subtle touches of humour, involving Kosie, Kannemeyer’s pet lamb. In between the action there are letters from readers of Tannie Maria’s column and she deals with them in a sensitive way: dishing out sound advice and a recipe for a tasty dish. Food, she believes, talks to your soul. You can find the recipes at the back of the book. Before you get stuck into Tannie Maria & the Satanic Mechanic you should first read Recipes for Love and Murder so you can get to know the characters, see how they develop and follow the story line. There are several references to Recipe For Love and Murder in Tannie Maria & the Satanic Mechanic.

I can’t wait for the third book featuring Tannie Maria. It can only get better.