In De Waterkant, Green Point, The Grey Boutique Hotel is set to launch in December 2016, with 13 double rooms with en-suite bathrooms, free high speed Wi-Fi and a mini bar. Two of the rooms incorporate a private balcony overlooking the majestetic Table Mountain. 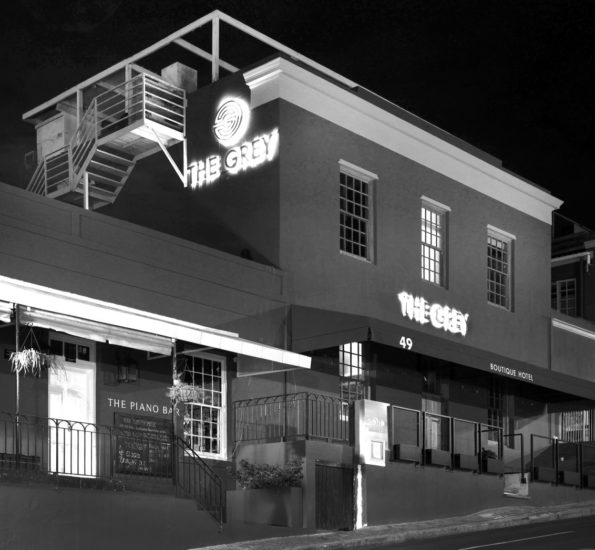 Together with the launch of the boutique hotel, a trendy collection of hospitality and leisure spaces now called ‘The Grey’, will be launched at the same time. The trend-epicentre destination hotel is home to Skybar, SHIO restaurant, The Piano Bar and KOS kiosk, together forming ‘The Grey Experience’, each with a unique purpose for tourists and local hangout spots.

The Grey Boutique Hotel incorporates décor elements of Moroccan influences with splashes of colour in the courtyards and imported décor materials that create a feeling of authenticity. The bright colours unfold in the intricate layout of the hotel and complement the grey hues of the building.

Co-Owner and Managing Director of The Grey Boutique Hotel, Lisa Calligaro, manages and owns two renowned jewellery stores in South Africa, Giro Del Mondo, integrating women’s fashion, jewellery and home décor. With hotel management behind her name, Calligaro embarked on the ‘The Grey’ project in June 2016, when the renovations began under the guidance of her father and hotel developer Christian Peters, who is also co-owner together with Monika Brune, owner of leading PR agency in Germany, Blume PR. Owner of Strandhotel Blankenese in Hamburg, Peters and Brune also own one of the largest Kitchen accessory companies in Germany, One Kitchen and a concept store in Hamburg, called ‘The Box’, which incorporates many stores under one roof. For Peters and Brune, The Grey Boutique Hotel means entering the South African market for the first time, while Calligaro is no stranger to it.

Together they have created an urban destination point in Cape Town for those wanting to experience De Waterkant and the city centre in its truest form. When the renovation is complete they will have taken an old dusty building and transformed it into a definitive place incorporating the different lifestyle spaces that will not only attract locals but also young travellers. A cool place for urban people.