CENTURION – The Multiply Titans will soon be celebrating their victories to the catchy beat of the brand new hit, Shake it, by popular music duo, RymStoff. 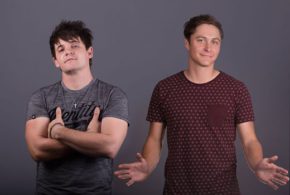 RymStoff (Christoff de Beer and Raymond Ray) wrote and recorded this special Titans song to strengthen the emotional relationship between the Titans brand and its loyal fans. The song will be performed, for the first time, at the T20 match between the Titans and the Cobras at SuperSport Park on 25 November 2016.

Both artists have years of experience in the music industry. Christoff (26), who matriculated from Montana High School and studied a degree in Education at Northwest University, was part of the group, Roots of Youth, where after he joined Kurt Darren’s band (Die KD Band) as lead guitarist.

Raymond Ray (32), a real rocker from Rustenburg, joined Gresham Records in 2003, and released the hit song, Calling. He has already shared the stage with many of South-Africa’s biggest artists and regularly receives standing ovations when performing, as lead artist, in various Barnyard Theatre-productions.

The group’s first single, Hartvlinders, made big waves in the music industry when it was released earlier this year. It has already been featured on the Top20 hit parades of various radio stations – including Bok Radio, Groot FM and East Rand Stereo – and the music video also featured on kykNET’s Top20 for more than 10 weeks. Hand aan hand, their second single, was also very well received and is regularly played by radio stations across the country.

Shake it can also be heard on RymStoff’s debut album, ALLES EN MEER, which was released in August 2016.

“RymStoff created two versions of the song. One for radio and television use and another version for live broadcasts from SuperSport Park. This will create a special atmosphere at the stadium, excite and captivate the hearts of the crowd and strengthen their support for the Titans. SuperSport Park is more than just a world-class cricket venue. It is a theatre where the Multiply Titans deliver magical performances – an iconic stadium with a unique atmosphere. Just imagine the value this new musical creation and spectacular could add to the relationship and bond between the players, brand and supporters. It will be a memorable experience for all. Our home crowd is positive and not afraid to express their passion and dedication for the game and Titans”, says Jacques Faul, CEO of the Multiply Titans cricket franchise.

Tickets for the T20 match between the Titans and Cobras at SuperSport Park, is available at