It’s not surprising that President Jacob Zuma plays a starring role in Zapiro’s 21st annual collection of cartoons, given the fact that he’s rarely been out of the headlines this past year. Mostly for all the wrong reasons. The cartoons have appeared in the Sunday Times, The Times and the Mail &Guardian. Zapiro sticks his barbed pen into everyone and he covers everything from State Capture to America’s presidential elections. Only the former Public Protector Thuli Madonsela and finance minister Pravin Gordhan get off lightly. 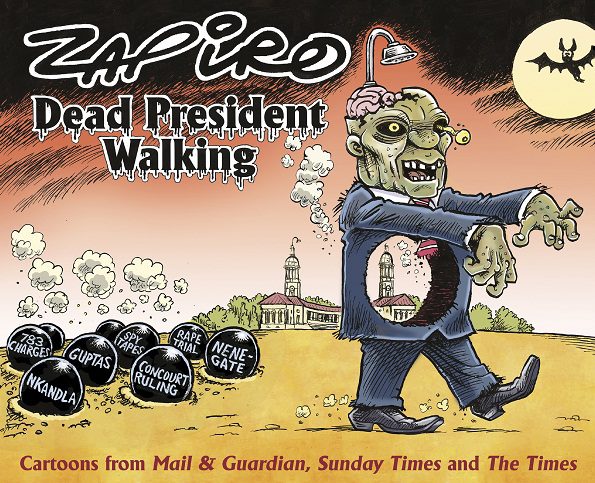 The now famous cartoon of Zuma preparing to assault the justice system gets a new twist. His pals the Guptas and his nemesis, Julius Malema, also feature prominently. The collection is a reminder of the year gone by and the cartoons will make you laugh or cry but you won’t feel ambivalent. In case you’ve forgotten: Isis killed 34 people in an attack on Brussels airport and a metro station; there were the #Rhodes Must Fall and #Fees Must Fall campaigns; Penny Sparrow’s racist tweet; Wayde van Niekerk’s sporting achievement at the Olympics, to name a few of the highlights and lowlights of 2016. Zapiro also commented on international events: Brexit; Martina Sharapova’s fall from grace and the horror everyone felt when a truck driver killed 84 people who were celebrating Bastille Day on the Cote d’ Azur in France. The pithy captions are by commentator and broadcaster Mike Wills.