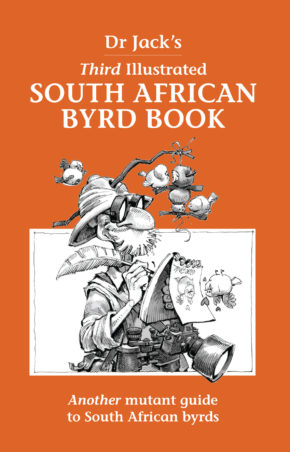 Dr Jack, a “twitcher” of note has been a cartoonist for more than 20 years, After graduating from the Pretoria Technikon he worked as an official artist for the National Parks Board for three years when he produced Dr Jack’s Illustrated South African Byrd Book which became a surprise success and was reprinted twice. Then he published Dr Jack’s Illustrated Second South African Byrd Book a year afterwards and 25 years later, Dr Jack’s Third Illustrated South African Byrd Book. It is definitely not your average garden bird book. The birds are unlike any you have seen before.  The cartoons lampoon the birds on the basis of their common names and Dr Jack definitely has a sense of humour. Perhaps that’s why there is no sketch of the Scarce Swift (schoutenapus myoptilus), instead it is a blank page with a frame and the English and Latin name. The African Emerald Cuckoo (chrysococcyx cupreus) is illustrated by the bird popping out of a cuckoo clock. There are cartoons of the Garden Warbler (Sylvia borin); Martial Eagle (Polemaetus bellicosus) and the House Crow (Corvus splendens), among others. But all of them guaranteed to raise a chuckle or two. Oh, and the Latin names are real enough, so you can also learn something.

Dr Jack lives in the Lowveld (Mpumalanga) where he is an active member of the Lowveld Birding Club and illustrates their newsletters. Dr Jack’s Third Illustrated Byrd Book will make an excellent stocking filler for Christmas or a gift for a birder.

*Dr Jack is well known for his political cartoons and a few years ago he joined forces with John Curtis to do these. Curtis conceptualises the ideas and Dr Jack draws them.