The Anderson family, Gwen (madam), Gogo, Thandi and their domestic, Eve, have been part of our daily lives for the past 23 years. If you don’t know who they are then you’ve been living in La-La-Land. The cartoon strip appears in the Mail & Guardian, the Cape Times; The Star, the Witness and the Namibian, to name a few. 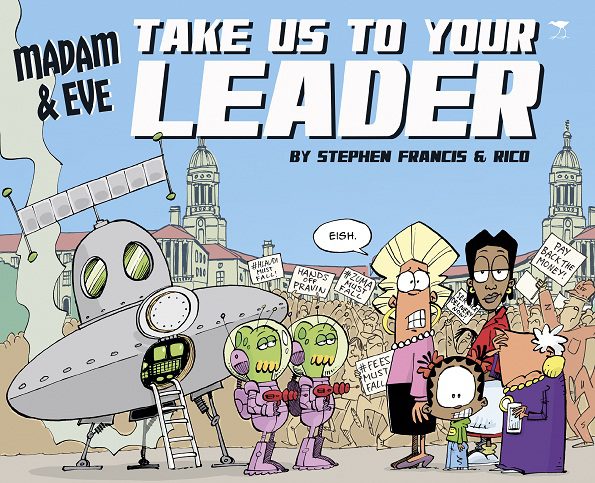 Francis and Rico look at political and domestic life in South Africa and whatever makes headlines they comment on it, in words and pictures. Their observations of the passing parade are caustic and sharp. The Guptas; Donald Trump; Jacob Zuma, who features prominently in this annual collection; Thandi who loves baiting Gogo; SABC “boss” Hlaudi Motsoeneng; the drought; Julius Malema and the EFF and #Fees Must Fall are just some of the topics Francis and Rico covered in 2016.  Madam & Eve: Take Us To Your Leader will make you chuckle out loud and give you lots to think about. There is also a cartoon devoted to Madam & Eve’s new South African emojis. It wouldn’t surprise me if they become a regular feature on Facebook, Twitter or our email correspondence.

The title of the collection comes from the two aliens who are regular visitors to South Africa. They were here to see if there has been any changes since their last visit. This time they were on their way to stop another alien who was attempting to colonise Planet America.