The second annual Maserati Cape Town Race Week will be taking place from 15 to 20 December at the V&A Waterfront. This premier yachting regatta acts as a prelude to the iconic Cape2Rio Yacht Race presented by Maserati and in just its second year has already become a prestigious event for sailors from South Africa and around the world. 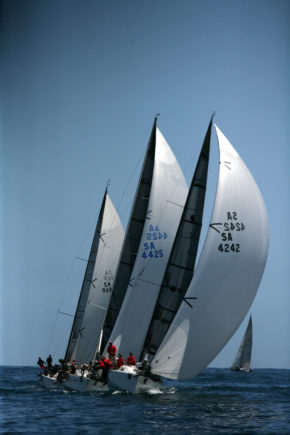 Cape Town plays host to a number of big sailing events, including The Volvo Ocean Race, Clipper Round the World Race, The Global Ocean Race and the World Cruising ARC Rally; Cape Town Race Week adds to these iconic events by showcasing what the Mother City has to offer at a time of year when the city is packed with local and foreign visitors. Spectators, participants, casual fans and the thousands of visitors who flock to Cape Town over the holiday season can look forward to an event that will not only deliver high-calibre sailing but also high-octane parties.

Cape Town Race Week Event Director Simon Borchert, says: “This is an amazing opportunity to celebrate the city’s global sailing heritage and combine it with the many accolades Cape Town enjoys as a favourite city the world over, creating an event of global stature with its roots firmly in the Mother City. It’s a chance to show the other side of sailing – the fun side – and open up a sport and pastime that remains mysterious to many. With Maserati Cape Town Race Week we aim to show the city and its visitors how easy it is to enjoy the sport, and to highlight the many upsides of the sailing lifestyle – healthy competition, beautiful venues and parties that live on in the memory.”

Cape Town Race Week will be a celebration of yachting and a great way for those not overly familiar with the sport to dip their toes in the water. Racing will include five divisions, with one race being held daily during the course of the event. On the 20th, a middle distance in-port race will take place that also acts as an in-port race for the iconic Cape2Rio presented by Maserati.

International Race Officer Stuart Childerley has been working hard with the Royal Cape Yacht Club race management team to put together the format of the racing and composing the race documents.

“Racing will take place in Table Bay and adjacent areas using a variety buoys and features in the area”, says Childerley. “For the competitive racing divisions we will provide an opportunity to demonstrate the overall performance of a boat and its crew, whilst sailing all angles of the wind. For the cruiser divisions we intend to provide a slightly more relaxed type of racing, ensuring everyone has fun whilst afloat. Downwind and reaching starts may be used.”

Keen spectators and fans are invited to the Maserati Cape Town Race Week Race Village on Jetty 2 at the V&A Waterfront. Here they will be able to visit the Race Pavilion, view the elegant regatta boats up close, enjoy a number of pop-up stores as well as the Corsa Classica – Maserati’s exhibition of some of their rarest vehicles including the unveiling of their new SUV, the Levante. The Race Village will be open from 10am to 8pm.

With Maserati returning as title sponsor for the second edition of this event, the famous Italian brand continues its global investment into high-end yacht racing. Brad Graaff, Operations Manager for European Automotive Imports – South Africa, says: “There is a clear synergy between the majestic yachts, the daring sport of sailing, and Maserati’s tradition of craftsmanship and cutting-edge technology. We are looking forward to a thrilling week in December.”

The six days will see world-class post-race activities taking place, including a VIP charity event at the Race Village where proceeds from the evening will contribute towards the The Royal Cape Sailing Academy and The Ripple Effect – an organisation committed to the preservation and conservation of the Western Cape’s coastline. Parties to diarise include the Raft Up party in Granger Bay, the Crew Party at the Maserati Cape Town Race Week Race Village and the Pool Party. Tickets are limited to all, so purchase now to avoid disappointment.

Says Borchert, “Cape Town is perfect for a regatta, particularly the weather in December and the beautiful surroundings. The Maserati Cape Town Race Week will be the ideal way to end the year, with the races and the numerous social gatherings providing an ideal opportunity to enjoy yachting at its most accessible and glamorous.”

Maserati Cape Town Race Week is South Africa’s premier yachting regatta. The mix of world-class yacht racing and shoreside events and parties is being hosted over six days from 15 to 20 December 2016.  It is run under five racing divisions: IRC 1, IRC 2 and three Club Divisions, which ensures close, exciting and enjoyable sailing. The regatta attracts sailors from South Africa and around the world.

Maserati is an Italian luxury car manufacturer which was established on December 1, 1914, in Bologna (Italy) by its founder Alfieri Maserati and his brothers. Their passion and talent contributed to the company DNA: innovation, excellence, and challenge, which are reflected in the brand’s claim “The absolute opposite of ordinary”. Today, the company’s headquarters and main production location are in Modena (Italy). A second state-of-the-art production location, based on the highest quality standards of the World Class Manufacturing (WCM) concept, was inaugurated in Grugliasco, near Turin (Italy), in 2013. Maserati has been owned by the Italian car giant Fiat S.p.A. – now Fiat Chrysler Automobiles – since 1993.

Its emblem, the trident, was inspired by the fountain on the Piazza del Nettuno in the center of Bologna (Italy). It is a symbol that ties together the brothers, their hometown, and the artistry and craftsmanship for which Bologna and Emilia-Romagna are known.

Through major investments into product development, production facilities as well as its worldwide dealer network, Maserati has hit a turning point. In addition to the successful GranTurismo and GranCabrio ranges, the latest generation of Maserati’s flagship sedan, the Quattroporte, and the new sports executive sedan, the Ghibli, provide the cornerstones to the brand’s strategy of producing some 70,000 and gaining a significantly strengthened presence in the global luxury car market.

Maserati Cape Town Race Week and Cape2Rio now form the backdrop to the latest offering form the Italian marque, the Maserati of SUVs, the Maserati Levante. A true SUV, the Levante combines true ability, exceptional performance and exquisite styling. The Maserati Levante and the rest of the model ranges will be on display at the Race Village on Jetty 2 at the V&A Waterfront from 15 December to 01 January.