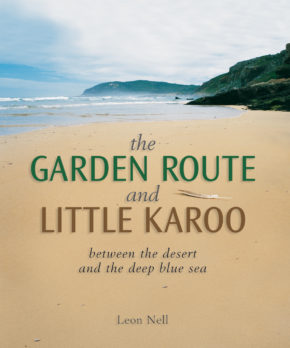 Between the Desert and the Deep Blue Sea

Next time I travel on the Garden Route (and parts of Route 62) I will look at it with fresh eyes. We’ve done the trip from Milnerton several times and I always knew the area was unique. But until I read Nell’s book I didn’t realise how diverse it is.

The chapters are The Garden Route; Mossel Bay Magic; George and its hinterland; Lakes and Legends; A Place Like Knysna; Prince Alfred’s Pass; The Robberg Refuge; A View of Plettenberg Bay; The Tsitsikamma Coast and Through Storms River – all part of the Garden Route.  The other section is The Little Karoo: and the chapters are Uniondale and Baviaanskloof; Oudtshoorn and Ostriches; In the Cango Caves; Crossing the Swartberg; Calitzdorp to Ladismith; Seweweekspoort; Treasures of Gamkapoort Dam and the Lost Valley of Die Hell.

The area is large and rich in diversity: some of it is dry it but teeming with a variety of wildlife while the lush rainforest belt is known as the Garden Route. The Little Karoo is between the Groot Karoo and the Garden Route. Once known as Outeniqualand, the coastal area between the Great Brak and Keurbooms rivers has attracted settlers for centuries “drawn to its great beauty and the hope of untold wealth”. Outeniqua is believed to be a Khoi word meaning “laden with honey” but, according to  Nell one theory is that it derives from the San Obiqua, an abusive term for murderer or robber. The Little Karoo is an arid semi-desert with vast and spectacular mountain ranges and stretches from Uniondale and Langkloof and Montagu, hemmed in by the Swartberg and the Langeberg and Outeniqua mountains.

The George district was proclaimed in 1811, and its first landdrost was Adrianus Gysbertus van Kervel. Today George is the largest town between Mossel Bay and Cape St Francis. In the early years numerous botanists and zoologists visited there and were astounded by the diversity of forest and fynbos. English novelist Anthony Trollope, in 1870, wrote about the trees “in George Town’s so-called street, a broad road … and here is a green sward treble the width of the road… and on each side there are rows of oak trees…”.

The book is packed with snippets like the one about Trollope. Plettenberg Bay, for example, was known by at least eight different names since it was discovered: Bahia da Algoas; De Keurbooms and Pisang River Bay, to name three.

The chapter on the Lost Valley of Die Hel is especially interesting: mainly because it is not easily accessible and it has always had an aura of mystery. It is a small section of the Swartberg Nature Reserve , and up until the 1960s was home to a community of 85 people, almost cut off from the rest of the world. It was discovered by accident in 1901 when the Boer commando General Deneys Reitz was cut off from Jan Smuts’s main army and Reitz and his comrades made for the Swartberg to escape the British troops. And instead of the Karoo plains below them they found themselves in Die Hel. In fact, Reitz described it in his book, Commando, and writes that he and his men were approached by a shaggy giant in goatskins, a white man named Cordier who lived there with his wife and a brood of half-wild children.  Today fewer than 15 people live there and it is now managed by CapeNature which has built facilities for visitors without spoiling the atmosphere. Today you can still see a house of glass and pebbles built by Lenie Marais, midwife, doctor and specialist in folk medicine. It was restored by the Van der Stel Foundation and is now used as a guesthouse.

The Garden Route and Little Karoo is a mine of information and yellow text boxes highlight items of interest.

There are numerous full colour illustrations most of them by Nell, who is also a well-known conservationist and excellent photographer.

Nell who has been in nature conservation for 20 years has produced a book that is a delight to page through and read. Buy a copy to take with you when next you visit the Garden Route and Little Karoo. Take the time to smell the fynbos, visit the Post Office Tree in Mossel Bay or walk across the Storms’ River (Paul Sauer) Bridge. You won’t be sorry.