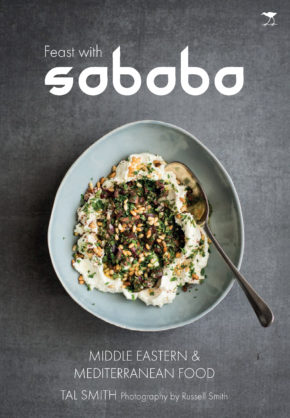 Smith owns Sababa, a Sea Point deli and this is her second book. The first was Sababa, which n Hebrew is slang for awesome, cool or great. But is also a play on the family name, Saban. As with Sababa, the recipes in Feast with Sababa are for the most part uncomplicated and easy to prepare. Many of them have Libyan (Sephardi) and Israeli roots.  There are seven headings: Meze Dishes, Soups, Fish, Meat and Chicken, Salads and Vegetarian dishes, Rice Dishes, Pies and Bakes and Sweets and Cakes. You can learn to make your own labneh (basically Lebanese yoghurt) and tabouleh. One of the more unusual recipes is fried cauliflower which you can enjoy as a snack with a tahina dip. Smith also caters for vegetarians with a variety of salads and more substantial meals like Shakshuka with Aubergine or Chickpea, Fennel and Tomato Stew. In the chapter, Fish, Meat and Chicken, there is a recipe for Cajun Grilled Yellowtail, a few chicken dishes and a moreish Pepper Crusted Beef fillet with Salsa Verde.

And if you have a sweet tooth try the Tiramisu, a Lemon Tart or a Bread and Butter pudding that uses cream and dark chocolate as some of the ingredients. Many of the recipes have a Cook’s Note, a tip to give it a fillip. Feast with Sababa lives up to its slang name and it will be well used in the kitchen.  The full colour, mouth-watering images are by Russell Smith, the writer’s husband, a well-known photographer, who works internationally and from his studio in Cape Town.