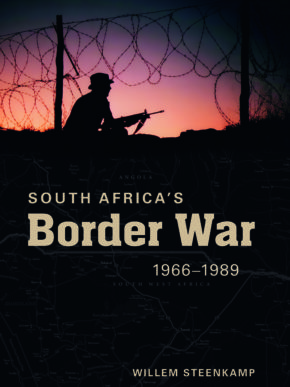 This book is a re-issue of the original that sold 31 000 copies and which has been out of print since 1989 when it was published soon after the end of the conflict. Since then more information has become available about the war, which was not really a war, but a long counter-insurgency campaign (COIN) that claimed thousands of lives.

Those who died in the Border War are not commemorated on any official monument or memorial. The South African Defence Wall at the Voortrekker Monument was raised by private subscription when it was announced that the names of the dead would not be welcome at “Freedom Park” on Salvokop at Pretoria, writes Steenkamp, although the names of the Cuban casualties of the Angolan civil war would be.

Not all of the skirmishes made newspaper headlines until long after the event. A Dakota was flying a group of generals and cabinet ministers from a border base to Ondangwa in 1986 when an SA-7 blew off most of its tail-fin. The pilot Captain Colin Green nursed the “Dak” to Ondangwa and made an almost perfect landing. According to Steenkamp, the SADF was so horrified by the narrow escape that news of the incident was not released for more than two years.

The Border War – the beginning of the SWA/ Namibia insurgency really started in 1957 when a group of expatriate Ovambos, which included the “father” of Swapo, Andimba  “Herman” Toivo ja Toivo, working in Cape Town founded a political movement, the Ovambo People’s Congress (OPC).  It was originally a labour movement but became a liberation organisation. Toivo became president of Namibia followed by Sam Nujoma.

This revised edition of South Africa’s Border War contains many new facts which were previously hidden under a veil of secrecy, and suppressed in public information because of strategic reasons and security concerns, or both.

South Africa’s Border War is written in plain English with very little military jargon. It is a highly readable account of a turbulent time in the country’s history. And it will also give a new generation of readers a clearer understanding of the forces and reasons that drove the conflict, and the ideologies behind it. Many of the photographs were taken by noted war correspondent, Al J Venter as well as Steenkamp, who is a well-known military historian with a number of books to his credit, among them Assegais, Drums and Dragoons: A Military and Social History of the Cape (Jonathan Ball).

Many people still have a lot of questions about this period, one of them being, who won the war? And another is why did the conflict not become South Africa’s Vietnam, as many expected. In his Epilogue,  Steenkamp tries to answer the questions and comes to the conclusion that the losers were the Cubans and the Soviets. Ultimately, he  writes, the winners were the peoples of southern Africa. “A long, painful road had to be travelled before the double victory could be reached. But at the end of the road was a genuine peace that has already lasted more than two-and-half decades, a long time on a continent as turbulent as Africa.”

As with the original edition, the revised South Africa’s Border War 1966 -1989, is destined to become a collector’s item. It is a valuable addition to the country’s military history.  It is also available in Afrikaans as Suid-Afrika se Grensoorlog 1966 – 1989.