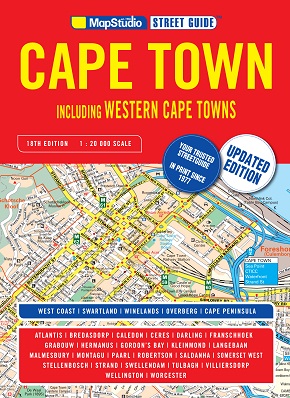 Even with Google Maps and Garmin it’s useful to have a street guide that you can hold in your hands. You can ruffle the pages and mark the spot with an x, and when you note unusual street names wonder who named them or who they were named for.

The 18th edition has 316 pages, with none for notes, which shows just how much the area has grown in five years. Names of streets and highways have also changed. Five years ago there were no Nelson Mandela Boulevard; Helen Suzman Boulevard or Jakes Gerwel Drive. Other struggle heroes who have streets named after them include Steve Biko and Raymond Mhlaba. Names that crop up regularly in different towns are Klipspringer; Pitt; Pendoring; Petunia; Pearl and Park, to name some. Pioneer is another popular name as are Plein and Buitenkant. There’s just one Rabbi Mervish Avenue and that’s in Vredehoek. There’s also just one Evita Bezuidenhout Boulevard and as expected it is in Darling where her alter-ego, satirist and playwright, Pieter Dirk-Uys lives. The street guide has a comprehensive index: a list of wine estates, hospitals, schools, suburbs and residential complexes. It’s worth keeping in the car, in case Google Maps or Garmin fail you.