The start of the 22nd annual under-19 Coca-Cola Khaya Majola in Bloemfontein was delayed by an hour on Thursday at four of the six venues after a massive overnight thunderstorm resulted in wet run-ups, waterlogged outfields and some water leaking under the covers. 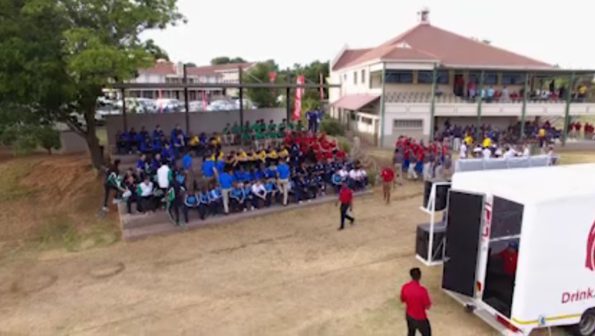 The potential crisis was, however, diverted thanks to the customary team work and innovation and the cream of the country’s under-19 players eventually got a full day’s play in, in steamy conditions in the city of Roses.

The damp conditions, not surprisingly made batting difficult initially and all the sides lost wickets early on.

In the end, four teams – SWD, Western Province, Border and Namibia – won on the first innings on a day when declaration cricket was the format played.

The first day belonged to the batsmen. Gauteng’s Mitchel van Buuren got the 1st century of the week and the only one of the day when he made 106 in his side’s draw with KwaZulu-Natal Coastal.

There were also 12 half centuries scored. Big fifties came from EP’s Matthew Breetzke, who made 77 against Northerns; Grant Esau of SWD, who made 82 against Mpumalanga and Eben van Wyk, who got 75 for Namibia against Limpopo.

The other half-centuries were scored by:

There was only one five-wicket haul on the day: Eastern Province’s Keenan Smith took 5/68 against Northerns.

The Coca-Cola Hero of the day award went to Gauteng’s Mitchell Van Buuren, the day’s only centurion, for gutsing it out on a difficult pitch against hostile bowling from KwaZulu-Natal Coastal. Gauteng were on 14/3 when he came to the crease. Together with his captain, Wiaan Mulder, he rebuilt the innings, putting on 109 for the fourth wicket.

Once things had settled down he cut loose and ended up with 106 – a heroic performance that saved Gauteng’s three-year unbeaten record at the week when it looked at one stage like they were in danger of surrendering it.