The second day of the Coca-Cola Khaya Majola Week in Bloemfontein saw two massive upsets as the finalists of the past four years, Gauteng and Western Province were both beaten in time cricket matches. 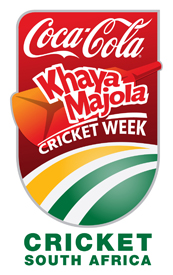 Gauteng, winners of the “main” game of the week for the past three years in a row, went down, on 1st innings scores, to Eastern Province in a thriller which saw the last two Gauteng batsmen hold out for nine overs before they lost their last wicket with the third-last ball of the day.

It was their first defeat at the week in three years.

EP batted first and posted 226, with David Masterton (57) and Chris Benjamin (54) making the main contributions. Gauteng’s Katlego Thena took the only five wicket haul of the day – 5/29 – but EP still got too many runs and Gauteng, in reply, lost wickets regularly with only Mitchell van Buuren putting up a fight, making 62.

Jade de Klerk, took 4/62, and executed a good run out, for EP and he was rewarded with the Coca-Cola Hero of the Day award.

Western Province came unstuck against Easterns. Province were restricted to 231/5, with Gavin Kaplan (52) to-scoring for them.

Easterns’ Louis Geldenhuis then made one of the four centuries of the day, a 125-ball 104, to see his side pass the 1st innings target with five wickets down. They batted on to get to 248/6, which saw them to the 1st innings win.

Free State’s Christopher Schreuder was 126 not out (152 balls, 14 fours and two sixes) when his captain declared on 254/8 against KwaZulu-Natal Inland, hoping to go for an out right win. That never happened, but it was still a good 1st innings win for the home team.

The other centurions on day two were Jean du Plessis, who hit 104 for SWD against Northern Cape. He faced 160 balls and hit 10 fours; while Ben Hendersen was 120 not out for Boland against Limpopo (116 balls, nine fours and four sixes).

Day three of the week (Sunday) sees the teams play two T20 matches each and at the end of that the pecking order will be clearer when it comes to deciding who will meet in the prestigious main game of the week.

On Saturday’s form, it seems like Eastern Province have put themselves in the running, while Northerns now have two wins under their belt.

There’s still some way to go, however and Gauteng and Western Province are likely to meet those teams in the 50-overs games that come later in the week, so nothing is certain yet.