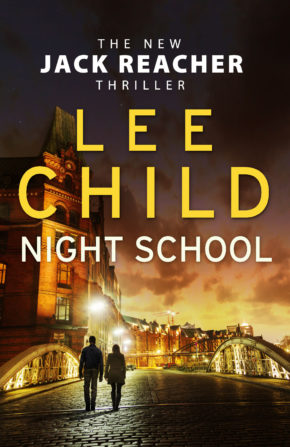 This is the 21st book featuring Jack Reacher, who usually packs a toothbrush and perhaps a change of underwear and keeps the creases in his trousers crisp by pressing them underneath the mattress. This time though, Reacher, who we know from his previous exploits, is a former Military Policeman; a drifter who often charges in where angels fear to tread, righting wrongs.

Night School is a prequel. It goes back to 1996 and Reacher is still in the military. The story opens with Reacher getting a medal for something he did in the Balkans. And in the afternoon he is ordered to go to Night School in Virginia without telling anyone. The night school consists of three people: Reacher, and two operatives, John White from the CIA and Casey Waterman of the FBI. There is also a team to man the desks. They’re answerable only to the President through National Security Adviser Alfred Ratcliffe and his deputy, Dr Marian Sinclair and  the trio are being primed for a top-secret mission: to find the American who is planning to sell something worth $100 million to the Saudis. But the powers-that-be have no idea what that something is and it is up to Reacher and his two fellow “students” to find out and stop the sale of whatever it is.

The US government has been keeping a watch on four young Saudis living in Hamburg who communicate with their shadowy Afghan handler through a courier. Even though the US has a man on the inside, an Iranian, whom they have turned, they don’t seem to be getting anywhere which is why they set up the night school.

Things heat up when Reacher, along with his trusted sidekick, Sergeant Frances Neagley, are sent to Hamburg to investigate. They uncover a hornet’s nest: old Nazis who long for the old order meet in a seedy pub where everything and anything is for sale. But they also want what the Saudis want and they will do anything to get it. Their tentacles reach into the darkest corners of German law enforcement and when a prostitute is found murdered, Reacher gets an unexpected ally, Herr Griezman, Hamburg’s  chief of detectives. Horace Wiley, the villain of the piece, whose dream explodes like a Reacher punch to the head, is a contemptible Walter Mitty. Through a process of elimination and solid detective work, the old-fashioned way, without the aid of Cyber technology unlike in Make Me where Reacher explored the dark net, he cracks the case. Child has written a complex thriller that will keep you on the edge of your seat until the last page.