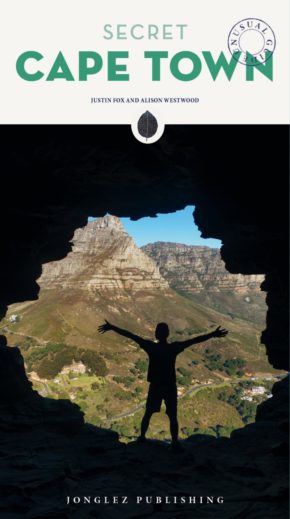 Cape Town is full of secrets. But thanks to Justin Fox and Alison Westwood you’ll know where to find them.

I’ve often been to the Public Library but I hadn’t noticed the poignant “We Are Still Here” memorial behind it. Although it was only installed in 2011 by mosaic artist Lovell Friedman, thanks to a grant from the Donald Gordon Creative Award, it is a tribute to 7 000 children who were sold as indentured labourers in the Cape Colony long after slavery was abolished in 1833.

UCT historian Lance van Sittert discovered thousands of advertisements for orphaned and destitute children which were published in the Cape Government Gazette between 1841 and 1921. The notices often headed Destitute Children were listed according to gender, age, race and sometimes where they were from and if they weren’t claimed within six weeks the children were apprenticed to ‘Fit and Proper Persons’. Lovell printed the adverts on ceramic tiles which are arranged to form the image of a child when viewed from a distance. There are also drawings and writings by modern day street children, also cast in ceramic, that serve as a reminder to the brutality of the past and the unkindness of the present. Friedmann’s work can be seen at the Mitchell’s Plain Hospital;  in Gugulethu and in Khayelitsha, and along the walkaways of the bus station next to the Cape Town Stadium.

Many of the secret places are off the beaten track, although not all of them.
Some of the more “open” secrets to those in the know are the Ubuntu Tree, a magical tree known for its healing properties; the Pump Tree in the Company’s Garden as well as a saffron pear tree that was planted 350 years ago.

Other secrets are a hammock on a beach; the remains of the Mouille Point lighthouse; Champion Trees at the Ardenne Gardens; the Secret Cave on Chapman’s Peak; the remains of the Old Zoo at Groote Schuur Estate and the wreck of the SS Kakapo at Long Beach, where Captain Niels Nicolayson, reportedly lived on it for three years. The West Coast and Cape Flats also have their fair share of Secret Cape Town. The Ma Tzu Temple in Montague Gardens, a privately funded temple for Taiwanese fisherman; the Trojan Horse Memorial in Athlone, a tribute to the young activists who were gunned down by the apartheid police in what subsequently became known as the Trojan Horse incident. At first glance the memorial appears to be a graffiti covered Vibracrete wall, but a closer look reveals the true horror of a day that will live on in infamy.

There are many more secret places in Cape Town. Some are open secrets although not many people take the trouble to go off the beaten track to explore them. Among them are Klein Zoar House in Brooklyn, and is where Wolraad Woltemade once lived. Although it doesn’t say so in the book it was restored by well-known foodie and writer, Jos Baker, who still lives there. There is also the Wijnland Auto Museum, a collection of vintage and classic cars, on the Joostenberg Vlakte.

And if you’re footsore from exploring the secret places you can always visit the Pollsmoor Mess, recently renamed Idlanathi , eat with us in Zulu, a public restaurant at the  maximum security prison in Tokai. The food is freshly prepared by the inmates and is open for breakfast and lunch.  Pollsmoor has been home to the famous, Nelson Mandela, and the infamous, members of the notorious Numbers gang, for example.

There are 154 secret places listed in the book from the City Bowl to the West Coast and Cape Flats. It is written in a lively and readable style with intriguing information about places you never knew existed. Secret Cape Town is a must for everyone, locals and tourists alike. Buy a copy and discover the hidden face of Cape Town: you’ll be surprised and amazed.