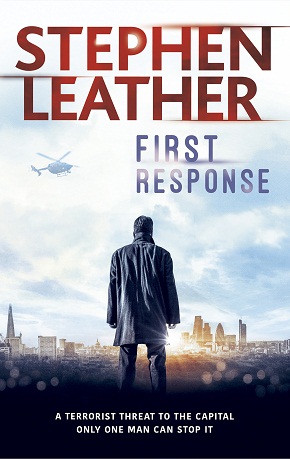 This is another standalone by Stephen Leather that doesn’t feature Dan “Spider” Shepherd, the former SAS trooper turned London police officer who was recruited into an elite undercover unit. However, it is a case that Shepherd would have enjoyed getting his teeth into. The plot is straight out of newspaper headline and the action takes place over a single day. Nine men wearing suicide vests take hostages across London in locations that include a bus, a pub, a café, a shopping mall and a child daycare centre.  An innocent person is handcuffed to each “suicide bomber” and the mastermind soon makes his demands known: release six jihadists from Belmarsh prison by 6pm or the terrorists will blow themselves up, killing everyone within reach. The man behind the plot is known only as Shahid and it is up to Superintendent Maurice “Mo” Kamran and his team to figure out what’s going  on. The bombers allow their prisoners, who include an MP, to use the hashtag ISIS6 to broadcast their plight and their demands on social media. But the police lose control of the situation, because of the dithering of the powers-that-be who don’t want to take responsibility in case it blows up in their faces.  Together with the government the police agree to free the jihadists and allow a bus to take them to the Biggins Hill airbase where the SAS have little time to put a plan in action that will neutralise the bombers.  Although nothing really happens during the cat and mouse negotiations with Shahid who refuses to talk to anyone but Kamran, the tension is palpable. One of the suicide bombers is an undercover cop, Kashif “Kash”  Talpur, and it’s not a spoiler to disclose, that, like the other eight men, he has been forced into this situation.  There are a lot of sub-plots and plenty of interplay between the terrorists and their innocent victims, although some of the victims are not that innocent. The hostages are eventually freed and interrogated by the police, and though their stories are plausible, something continues to nag at Kamran whose suspicions are confirmed when he questions Kash again. Then he has a Kodak moment and a photograph helps him to crack the case.  First Response is not an edge-of-your-seat read but it will keep you glued until the unexpected climax.