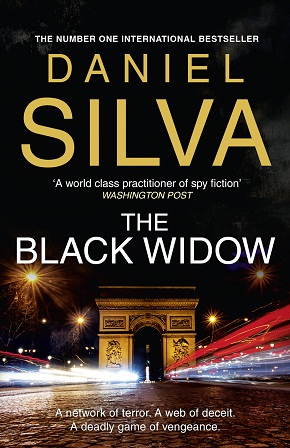 In his foreword Silva says he started writing the Black Widow before the Islamic terrorist group, known as ISIS (Islamic State of Iraq and Syria) carried out the wave of bombings and shooting in Paris and Brussels that left more than 160 people dead. And at one point he briefly considered abandoning the project. It’s a good thing he didn’t as this, the 16th nail-biter featuring Gabriel Allon, noted art restorer and legendary Israeli agent who will soon become head of the “Office” Israel’s covert operations centre, is gripping reading. Allon earned his reputation when, as a member of a crack team of operatives, he helped to assassinate members of Black September who were responsible for the massacre of the Israeli athletes at the Olympics in Munich. Allon killed six of them and shot each of them 11 times, one bullet for each murdered athlete. In the course of his career, Allon’s son is killed in a bomb explosion while his first wife, Leah, who is now in a psychiatric home, was severely burnt in the incident and left mentally traumatised.  As Allon’s life is constantly under threat the Office manufactured a story that the legend is dead. But he is very much alive and living in Israel with his new wife Chiara and their twin sons where he is planning some R&R. But the best laid plans of mice and men often go astray and when a bomb explodes in the Marais quarter of Paris destroying the Hannah Weinberg Centre, its founder, Hannah Weinberg, and killing and wounding many of the delegates who were at a press conference there, Allon is drawn in to the hunt for the bombers.  The collateral damage set off by the 500kg bomb was immense: it toppled buildings and injured passengers who were travelling on the Metro but just before the explosion two masked men were senselessly dispatching people in a boulangerie. Then another bomb goes off in the Albert Cruyp market in Amsterdam and it is determined that a man known only as Saladin is the mastermind, and later he is also responsible for the attack on the National Counter Terrorism Centre in Washington.
Allon who is called in to track him down recruits a woman doctor, Natalie Mizrachi, who of her own free will joins the hunt for the terrorist who communicates in total secrecy, behind sophisticated encryption technology.
She is trained as an Isis recruit, a black widow, out to avenge the death of her former lover.
It is a gripping story with plenty of action that involves a top secret French unit headed by Paul Rousseau,  the various American agencies and the Dutch services. But it is Allon who runs the show. There is a breakthrough when the team finds Jalal Nasser, a Jordanian who lives in London and is Saladin’s chief recruiter. The denouement is as explosive as the opening lines and comes to a head in an isolated cottage in Hume Virginia, where Saladin and his accomplices are interrogating Natalie. Most of the main players who featured in Silva’s previous thrillers have roles in The Black Widow. Among them are Uzi Navot, who is leaving as head of the Office to make way for Allon; Mikhail Abramov, the watchful assassin; Eli Lavon, a top surveillance artist and financial genius;  and Dina Sarid, a terrorism specialist and the Office’s repository of institutional knowledge. There is no doubt that Silva is a master story teller and he has the knack of creating characters that you either love or hate. The Black Widow is a pulsating read and is one of Silva best thrillers to date.