MODIMOLLE, 5 January 2017 – Casey Jarvis from State Mines threw everything except the kitchen sink at Martin Vorster, but the tenacious Southern Cape junior held on to his overnight lead on day two of the Nomads South African Boys U-15 Championship on Thursday. 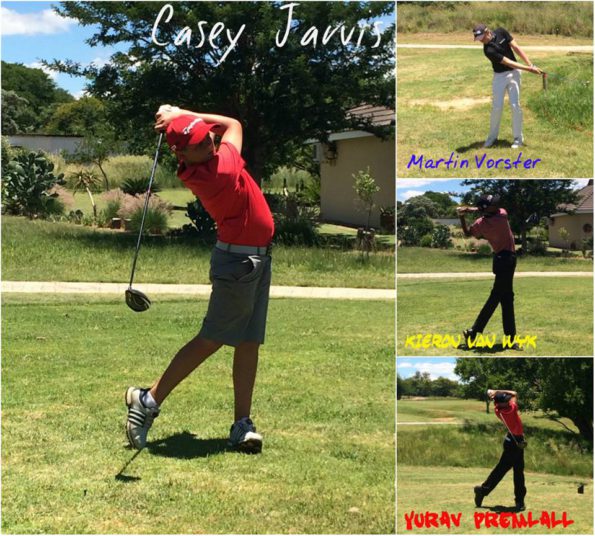 Jarvis notched seven birdies at Koro Creek Bushveld Golf Estate, but Vorster responded with five birdies of his own and eagled the par five fifth to match Jarvis’s brilliant six-under-par 66.

Vorster leads the prestigious national championship on 11 under 133, with Jarvis tucked into second at 10 under.

“It looks like we are heading into a two-horse race for the title and if the final round is anything like the second round, we are in for a treat with Martin and Casey playing exceptional golf,” said David Younge from the South African Golf Association.

“The conditions were still pretty fresh this the morning after the still two-club wind on Wednesday, and the wind pushed the 15 to 20 km per hour mark. We mixed up the tee boxes, using club, senior and ladies tees, but it didn’t make much difference to Martin.

“He took full advantage of the pristine conditions at Koro Creek and his magnificent ball striking, pumping drives over 300 metres and positioning his ball really well around the course to set up birdie opportunities with great irons into the green. It’s hard to believe he can hammer the ball that far when he is not yet 15.

“It must be said that 13-year-old Casey played extraordinarily well. Although he hits it miles shorter than Martin, he doesn’t give an inch and he birdied two of the toughest holes – the 195 meter par three seventh, which is their stroke one and the ninth, his final hole.

“The battle between them resulted in a hugely entertaining and exciting tussle for the crowd that followed this group and we look forward to more of the same in the final round.”

Kieron van Wyk from Ruimsig moved into third with successive 72s, while Glendower’s Yurav Premlall sits in fourth place at one over after posting rounds of 72 and 73.