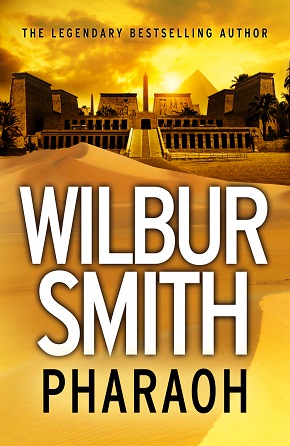 Pharaoh is the sixth book in the Egyptian series. In the fifth book, Desert God, the protagonist Taita is general of the armies, a Superman and super eunuch with the touch of the divine who crosses the Nile and seas taking with him the royal princesses, Bekatha and Tehuti, to seek allies, who will help him confront the Hyskos who are threatening to invade Pharaoh Tamose’s Egypt.

However, for various reasons Taita’s mission is not an unmitigated success, leaving the princesses behind. When he returns Tamose is dead, his place has been usurped by his weak and cruel son, Utteric Turo, who seizes Taita’s riches and tosses him in to the royal prison, the Gates of Torment and Sorrows, run by the evil Doog. And Egypt is on the precipice of disaster. But Taita, the Superman and super-eunuch escapes from the prison and unexpectedly encounters some old friends, including Rameses, the rightful heir to the throne, and Egyptian Captain Zaras, now King Hurotas, who eloped with Tehuti (with Taita’s blessing), after an arranged marriage with the Minos of Crete failed to materialise. They now have a daughter, Princess Serrena of Sparta, a female clone of Taita, except she’s no eunuch. She is intelligent, is a warrior, and is divine because she was sired by Apollo and she’s in love with Rameses and he is equally besotted with her. With Taita’s help, Egypt is restored to her former glory. If you’re a Wilbur Smith fan you’ll enjoy it, otherwise I’d skip it.  It’s no worse than the other five in the series: River God, Seventh Scroll, Warlock, The Quest and Desert God.