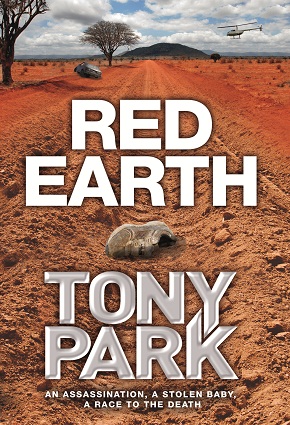 This is the 13th thriller by Tony Park who was dubbed Australia’s Wilbur Smith when he published his first book, Far Horizon, about an Australian Army officer Mike Williams, an overland tour guide in Africa, who has a run-in with ivory poachers in Mozambique. But he is much better than Smith, 84, who has written over 30 best-sellers and continues to churn them out (See review of Pharaoh).

Red Earth opens when helicopter tracker pilot, Nia Carras, is directed to a wake of vultures by the Zululand anti-poaching unit, Zap-Wing. The vultures are gorging on a dead nguni cow, just outside the boundaries of the Hluhuwe-iMfolozi game park in KwaZulu-Natal where most of the action takes place. When she notices a few dead vultures she notifies Zap-Wing who calls in wildlife researcher, Mike Dunn, who is burdened by his past. Nia is alerted to a stolen Volkswagen Jetta which is later found abandoned on the N2.  Mission accomplished she is on her back to her Virginia base when a Toyota Fortuner with a baby on board is  hijacked by Shadrack Mduli and Joseph Ndlovu. But the mother Suzanne Fessey fights back and Mduli is fatally wounded while Ndlovu takes off in the SUV with the baby. So begins a breakneck chase with Nia in the air and Dunn on the ground. Ndluvo meanwhile is heading for his cousin Themba Nyati, a young reformed car thief, who loves the bush and is being trained as a rhino guard, and as luck would have it,  is being mentored by Dunn. With Themba is Lerato Dlamini, the daughter of a high-powered businessman and former politician, who orders Themba to walk her safely home from school. But Joseph has other plans and forces Themba and Lerato in to the Fortuner and the chase is on to rescue them. They get no help from the police who are investigating the assassination in Durban of an American diplomat.

As a result of the murder the CIA is in town and they also have the Fortuner and Plessey in their sights. It seems that terror, read ISIS, has come to South Africa. The story moves along at a rapid pace: there’s murder, blood and gore,  a  machinegun toting bad guy and nothing is as straight forward as it appears. There are two romantic threads in the story: Themba and Lerato and Nia and Mike and the sex scenes between the latter two, when they finally get to it, are cringe-worthy and could win Park the Literary Review’s  Bad Sex in Fiction Award. There are plenty of surprises and Red Earth will keep the adrenaline flowing until the last page. Park and his wife, Nicola, spend a lot of  time in southern Africa and know the wildlife terrain intimately. It shows in Park’s  writing.  If you’re not one already, Red Earth will make you a Park fan.