DOWERGLEN, 11 January 2017 – If you were wondering just how badly the next generation wants a stab at competing in the world’s second oldest national championship, just ask 20-year-old Free State amateur Juran Dreyer.

The Bloemfontein golfer was positively gushing after he fired a staggering eight birdies for a seven-under-par 65 in Tuesday’s qualifying round at Irene Country Club to seize the first of four spots into this year’s BMW SA Open, proudly hosted by Ekurhuleni.

“It’s a dream come true, there is no other way to describe it,” babbled Dreyer after Wednesday’s practice round. “The SA Amateur champion and four of the top ranked guys automatically qualify, but the rest of us have to slog it out against more than 300 guys other gunning for 11 spots.

“You don’t have any expectations. You do what you can to stay in the moment and hope your best is going to be good enough. I can’t even begin to imagine what it’s going to be like to hit that first tee shot on Thursday and to walk inside the ropes with guys like Ernie Els, Rory McIlroy and Brandon Stone out there in front of me. I am going to cherish every memory from this week.”

Dreyer will debut in the star-studded field at Glendower Golf Club in Thursday’s first round with fellow qualifiers Theuni Bezuidenhout from the North West Province, Darin de Smidt from Central Gauteng and Philip Geerts from Italy.

Dreyer was the top scorer for Free State and ranked seventh in the Most Valuable Player’s list during the South African Inter-Provincial Championship in 2014.

He had his first look at the championship layout when he teamed up with six-time Sunshine Tour champion Dean Burmeester for a practice round on Wednesday and seeing the layout decked out for the Sunshine Tour and European Tour co-sanctioned event left him speechless.

“Never mind all the branding and the hospitality tents and the crowds, the course is an absolute dream,” he said. “It’s absolutely pristine and green throughout, the rough is thick and the greens are brilliantly groomed and roll so true.

“Anytime you have the chance to pick the brains of a Chase to the Investec Cup winner, you want to make the most of it. When Dean agreed to play the practice round with me, I had to pinch myself twice to make sure I’m not dreaming. We are old practice buddies and he is one of my golfing heroes, so it was the chance of a lifetime to see the SA Open layout through his eyes.

“Dean gave me a lot of tips on positioning and it was great to watch his strategy around the course. The key is to hit the right side of the greens and to visualise the pace and lines and then just sent the putt on its way. The rough isn’t as brutal as last year, but if you want to limit your mistakes, you need to keep it play.”

Dreyer prefers not to speculate on his chances of lifting the Freddie Tait Trophy as the leading amateur in this year’s championship on Sunday.

“I’m probably not among the favourites,” he jested. “For me, the chance to play in the BMW SA Open is already reward enough. I’m not going to get ahead of myself and start thinking about winning the Freddie Tait. I just want to take it a round at a time, try to make it to weekend and enjoy the crowds, the course and the chance to run shoulders with some of the golfers in the world.” 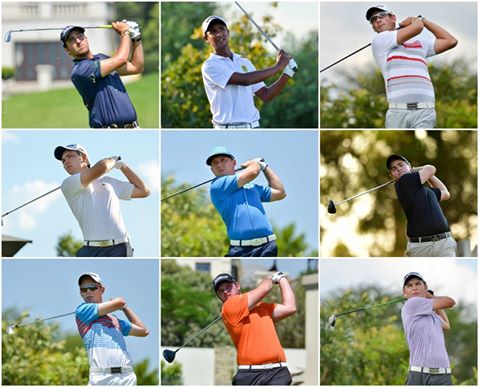 Here are the amateur pairings and tee times for the first round of the 2017 BMW SA Open Hosted by Ekurhuleni at Glendower Golf Club on Thursday, 12 January. Good luck to all our rising stars!!

All players RSA unless otherwise specified