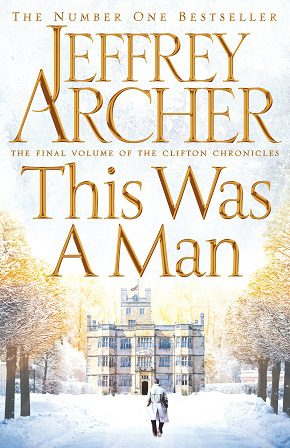 This Was A Man

Review: Brian Joss This Was A Man is the seventh and last volume covering the ups and downs of the Barrington and Clifton families. The other six were Only Time Will Tell, The Sins of The Father, Best Kept Secret, Be Careful What You Wish For, Mightier Than The Sword and Cometh The Hour. In typical Archer style each book ended with a nail-biter leaving the reader wanting more.  In This Was A Man which covers the period from 1978 to 1992 Harry Clifton,  a successful author of detective thrillers, is about to kill off his creation William Warwick and is ready to write another novel;  Emma (Barrington) Clifton is the chairman of the successful shipping company, Barrington’s, their son Sebastian Clifton, now married to Samantha, becomes chairman of Kaufman Farthings Bank after the sudden resignation of Hakim Bishara who was wrongly convicted of a crime and jailed in Cometh The Hour; Sebastian’s daughter, Jessica, is expelled from the prestigious Slade School of Fine Art; Giles Barrington’s sister, Lady Virginia Fenwick, is up to her usual dirty tricks; the truth about her son, Freddie, who inherited a distillery, is also revealed. Giles, a long standing Labour MP, whose political fortune is balanced on a knife edge, is preparing for another election and is standing against his sister, Emma, who is campaigning for Margaret Thatcher.  And Giles finally learns the truth about his wife, Karin, whom he helped to escape from East Germany in Cometh The Hour, and about The prologue gives some clues of how events will unfold but it will not be a spoiler to say that Emma is about to uncover a deep secret and Karin who has travelled to Cornwall ostensibly to meet her “father” is staring death in the face through the barrel of a gun. There are numerous plotlines that run throughout the epic series and the characters, whether good or bad, are completely believable. The bad guys stick to their principles although one of them, Desmond Mellor of Mellor Travel who is in prison has a change of heart, it doesn’t alter the status quo. As for Lady Fenwick, even though she’s just about penniless, gets her revenge in a most unexpected way.  We find out if Emma resigns as chairman of the Bristol Royal Infirmary to take up Margaret Thatcher’s offer. Harry and Emma Clifton have been together for more than 50 years and still have each other’s backs. Things take a sad turn when one of the main characters is diagnosed with Motor Neuron Disease. The tension ratchets up at every page until all the secrets (and the skeletons) are revealed.  At the end , Giles, a much admired orator, delivers a moving tribute to his brother-in-law, Harry, who have been friends since grammar school. Archer is a master storyteller and he proves it again with the seven volumes of the Clifton Chronicles.