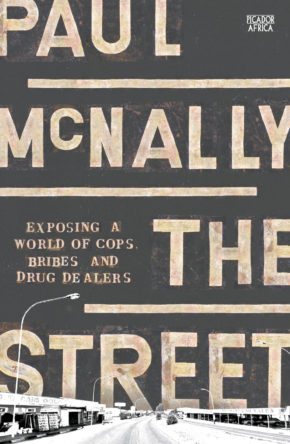 Ontdekkers Road, Johannesburg, has changed a lot since I lived in nearby Florida, just off Die Ou Pad, more years ago than I care to remember. What hasn’t changed though is its length – it’s many kilometres long and stretches almost to Krugersdorp. It was home to a couple of bio-cafes, butchers, hardware stores, banks, motor dealers and bottle stores, and the people who had businesses there were for the most part hard-working and honest, at least those who I knew or with whom I had a nodding acquaintance. In places it was down-at-heel but if there was any drug dealing it was well hidden.

Journalist McNally, who works in radio and is a founding member of the Citizen Justice Network tells the story of Ontdekkers Road today. It is a street inhabited by drug lords, dealers, murderers, vigilantes, honest citizens ,and corrupt cops who are in cahoots with the dealers, taking bribes, left right and centre, without any sense of shame. But in the cesspool that is Ontdekkers Road, one man Raymond, from his shop, is recording in his notebook the daily activities of the dirty cops and storing the details on a flash card. But what he wants is for the police to be accountable. Raymond is not above bearding the lion in his den: speaking to the commanders of the various police stations that fall into the Ontdekkers Road area: this includes Sophiatown, which used to be known as Triomf in the apartheid years, Florida and Brixton, whom he persuades to come and watch the activities on the strip or tell them who the corrupt cops are. Then McNally introduces Raymond to Colonel Khaba  who has been deployed to Sophiatown from Johannesburg. Khaba was previously at Ladysmith, where apparently something went wrong but he doesn’t elaborate. In addition to Khaba there is Wendy, a police reservist whose policeman husband was murdered by a drug lord and her adult son is an addict, so she also wants what Raymond and Khaba want, an honest police service. They have their eye on Obi, a drug dealer and Lerato, a police officer who terrorise Ontdekkers Road and the dealers, not to arrest them but to take bribes. McNally tells the story as he sees it and through the voices of the various characters, good and bad. There are some interesting vignettes, especially one about the pastor whose church was above Raymond’s shop. Every drug dealer under the control of Obi, who was trying to take over from another drug lord, a Nigerian, Chuba, had to attend Sunday services but then the pastor started skimming the take. The Street is an insightful look at the breakdown of law and order and is probably a microcosm of what happens across South Africa.