Mountain View and Cape Town, 18th January 2017: Mozilla, the non-profit organisation behind the open source browser Firefox, is pleased to announce the selection of the five semifinalists for its global Equal Rating Innovation Challenge – a global initiative to help provide access to the open Internet to those still living without it. 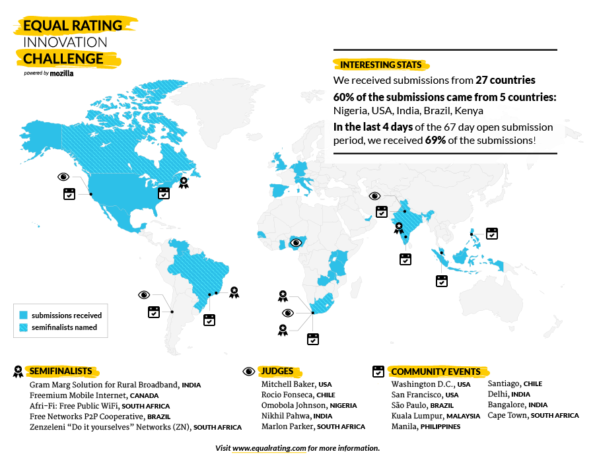 South Africans Tim Human and Dr. Carlos Rey-Moreno, both residing in Cape Town, were two of the five semifinalist team leaders announced. Furthermore, Steve Song, a born South African who is now living in Canada, is among the final five.

Katharina Borchert, Mozilla’s Chief Innovation Officer, and Marlon Parker, Founder of Reconstructed Living Lab (RLabs) and part of the Challenge’s panel of judges, announced the semifinalists and discussed the trends that were seen across submissions at an event held at RLabs in Cape Town on 17th January 2017.

“Not giving people access to information creates a socio-economic divide, not just a digital divide. Every person on the planet needs to have hope, which is what the internet is for. It gives you information, it gives you a choice, it gives you an option. This is why I wanted to be a part of this Challenge and become a judge.” said Parker.

Each team will receive 8 weeks of mentorship from experts within our Mozilla community, covering topics such as policy, business, engineering, and design. The mentorship is broad to better assist the teams in building out their proposed concepts.

Zenzeleni “Do it for yourselves” Networks (ZN)

While Mozilla will disclose further information about all of these teams and their projects in the coming weeks, some themes occurred in the overall submission process:

Following the mentorship period, on March 9th, Mozilla will host a day-long event in New York on the topic of affordable access and innovation where the semifinalists will present their concepts.

Following the presentations to the judges at this Demo Day, there will be a week of open voting on EqualRating.com to determine the winners of the Challenge which will be announced at RightsCon in Brussels on March 29th.

Further information can be found on www.equalrating.com.