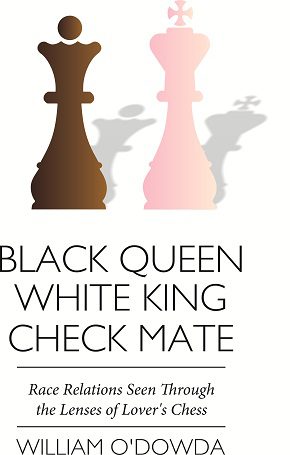 This is a Romeo and Juliet story of a different kind. Firstly, it’s non-fiction; secondly it’s written by a white Canadian, not Shakespeare, who “married” a black woman and hoped that eventually she would move in with him. We never know whether she does. But hope springs eternal. Sub-titled Race Relations Seen Through the Lenses of Lover’s Chess, O’ Dowda examines the themes of racism, xenophobia, tribal authority and gender rights on “the South African checkerboard of love”. The author has a warning it seems for all white men who are contemplating getting married to a black woman. The book basically is a “risk assessment”. “By all means look at your options, but open your eyes to South African realities.”

O’Dowda says he met his wife-to-be when she was a waitress who was working at a Chinese restaurant and while he was waiting for his takeaway order he slipped away to buy some roses from Pick n Pay, gave her a rose with his business card, along with the payment and a generous tip. His ploy worked and she called him soon afterwards, and they met after hours for the first time. So began an uncertain and unusual courtship, especially for O’Dowda who had to understand the various rites and traditions of tribal courtship. O’ Dowda’s story is divided into four: Spring, Summer, Autumn and Winter, which was one of discontent. The author writes about Lobola (the bride price); Ukuthwala (abduction, which happens when the family disapproves of the pending union); Inhlawulo ( a fine the man has to pay if he gets the woman pregnant out of wedlock) and the Ukuvuma ceremony (the reception the bride’s family hosts when they accept the groom). The author also describes the wedding reception braai where he received complaints that he served only wine, beer and soft drinks. But no spirits. There is no plot line as such: it is a story of a marriage seen through the author’s eyes and he quotes extensively from media clips about customary marriage, tribal authority, gender rights and alcoholism which is a big motif in his experience.  There is a lot of philosophising and general observations about black-white marriages. This slim volume gives a personal view of inter-racial marriages and it goes a long way towards unravelling  The book has been translated into SiSwati and is titled Umlabalaba Wetitsandzani.