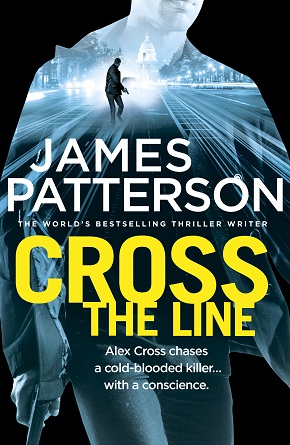 James Patterson has written many, many books, some in collaboration with other writers: Maxine Paetro (The Women’s Murder Club series); Michael Ledwidge (Detective Michael Bennett series), children’s books and graphic novels. In my view Alex Cross, detective, psychologist and FBI profiler is his best creation. And it shows in Cross The Line, the 24th  thriller  featuring the Washington DC police detective who with his detective wife, Bree and his partner John Sampson are up to their eyeballs investigating murders, a motorcyclist shooting errant motorists, and a group of vigilantes who are intent on making America “great again”. Perhaps Patterson was being prescient when he wrote Cross The Line. When former chief of detectives Tom McGrath and his mistress Edita Kravic are shot in a drive-by and cop Terry Howard who committed suicide after apparently killing McGrath whom he claimed framed him, it seems an open and shut case. But Cross has his suspicions and voices them to Bree, who has been promoted to Chief of Detectives.  Like all Cross thrillers this one opens with a bang, when a motorcyclist shoots a Maserati driver, in the first of several such incidents. Then Cross and his team are sent to investigate a drug factory manufacturing top quality meth and ecstasy, where 22 people are found murdered. Ned Mahoney and the FBI are called into help. Then another facility is hit and in both instances the killers leave the drugs and the bundles of dollars untouched. Suspicion falls on Nick Condon, a former member of the US Special Forces but now a soldier for hire. Then there is a breakthrough which sends Cross and the team on another tangent. There is plenty of blood and gore in this pulsating thriller. But there is a softer side: the interaction between Cross and his family: his wife Bree, his  daughter, Jannie, a star runner, his genius young son Ali, his rangy son, Damon, who is back at university, and of course his 90-year-old Mama Nana, the glue that holds the family together, familiar figures in all the Cross novels. Cross The Line will keep you riveted.