A new year, a new you. Why we shouldn’t overlook biltong as South Africa’s best weight-loss snack. 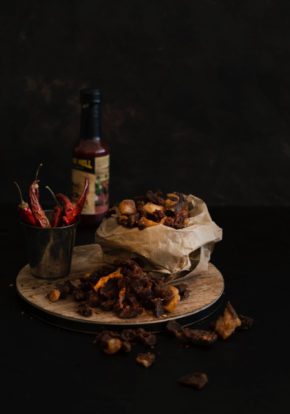 Well, we’re here. It’s the start of another new year and gym memberships are on the rise, fad diets are in craze and queues of us are getting in line to change our bodies.

But simply slaving away at the gym doesn’t cut it.

Many personal trainers estimate 80% of your focus should be on what you eat and only 20% on how much you exercise. But when you’re chained to your desk having missed lunch to finish a report for a client, it can be tempting to head down to the nearest corner café and bury your face in the chocolate aisle.

And as for the myriad snacks professing to be healthy (from yoghurt treats to granola bars and everything in between)… are they really so good after all?

We chatted to Maxime Eon, founder of Biltong Board, about why South Africa’s staple food is one of the most underrated weight-loss aides of all. Max has started biltongboard.com to deliver carefully-packed uncut meat to subscribers’ doors monthly, and he believes that a mind-set shift will help us all shed the pounds. Because biltong isn’t just a throwaway snack. It’s a true superfood.

It’s quick and easy, and fills you up

“To really curb a craving for food, you need something high in protein,” Eon says. “Biltong is packed with proteins, and better yet, low in sugar.” It’s also not a carbohydrate, which means it’s absorbed slowly and keeps you feeling fuller for longer.

Biltong tastes great too, and thanks to the curing process, can be infused with a variety of herbs. What you get then is a fast, easily-accessible snack that keeps your body satiated for hours, not minutes.

Biltong’s history is inexorably tied to the history of South Africa. When the early settlers (Voortrekkers) arrived, they needed a way of storing their meat lest it went off!

Thus, the curing process was formed, a century-old method passed down the generations and designed to preserve the integrity of the meat.

The protein-rich super snack that results is perfect for diabetics or the gluten intolerant. It’s also naturally high in creatine (who would have thought?) which boosts muscle growth, making it a natural snack for athletes.

Biltong’s natural spices and flavours make it a versatile snack.

“I have many clients,” says Eon, “who toss it together with a salad for a delicious healthy snack.”

Others prefer to eat it on-the-go on its own.

Biltong is cured in vinegar and salt and left to air naturally, so it lends itself to a variety of flavours.

One of Eon’s most popular flavours, chilli biltong, puts an extra pep in your step. “Chilli is good for your digestion and speeds up your metabolism to boot.”

To compare biltong with beef jerky is tantamount to sacrilege. Plus, it’s a mistake, because the two – while distant cousins – are very different indeed.

“Jerky,” Max explains, “is cooked in a dehydrator for 6-12 hours and given preservatives. The result is a snack high in salt, stripped of the natural goodness in the meat.”

By contrast, biltong is given as long as a week to dry naturally, and cured using vinegar and spices, resulting in lower salt content and a more protein-rich meal.

Max believes biltong item has been commoditized to the point that many foodies and weight loss gurus overlook it. But next to a sugar-rich yoghurt bar, there’s only one clear winner.

“Sticking to a consistent diet is crucial,” Eon says.

That’s why one of the reasons Eon is championing his subscription service, whereby a fresh box of biltong is deliver to subscribers’ doors monthly.

“The subscription food model is becoming more popular in South Africa, and it’s easy to see why,” he says. “With hectic work days, people are prone to lapse back into bad habits. But when you’ve got a delivery straight to your door, there are no excuses.”

In the end, Eon believes there’s no substitute for true protein, and thinks that our diets are far too high in sugar as well.

“The sooner we change our perception of the biltong industry and start treating it as a serious health snack, the better.”

To take a look at the Biltong Board, visit www.biltongboard.com.