La Tête restaurant, on Bree St, Cape Town, has been listed by CNN as one of the hottest new restaurants in the world for 2017. 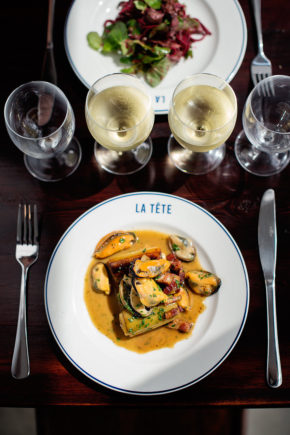 CNN rounded up the top new restaurants openings around the world in places as far flung as Switzerland, New York, Japan, Los Angeles, Mexico and New Zealand, cited La Tête, as one of the “best new restaurants for 2017.”

“From the Caribbean to New Zealand, global gourmets will be digging out their airline schedules to get to these must-try tables.

Whether manned by established chefs with household names or the up-and-comers hoping to rival them, one thing the fervent foodie can count on is that the world’s newest restaurants are serving up surprises.”

The entry for La Tête, went as follows;

“Situated in Cape Town’s increasingly popular Bree Street restaurant landscape, part of their goal is to get diners to embrace otherwise unfamiliar parts of the animal.

It’s no surprise that Giles worked for years with the godfather of nose-to-tail chefs, Fergus Henderson, at London’s peerless St John restaurant.

The menu changes daily but will include plates such as crispy pig tails.Farm-to-fork eatery La Tête recently opened on Bree Street and is headed up by Chef Giles Edwards, who creates food from the whole carcass, with nothing wasted.”

Giles Edwards, Chef Patron at La Tête, commented; “It’s great to get such recognition so early on from a media organization with CNN’s reach and influence. We’ve already had international visitors flocking in, and going away happy and satisfied with what we do. Our style of cooking seems to have hit the spot.”

He added that the locals are also discovering and enjoying his nose-to-tail cuisine. “We’ve had a great response from locals. Our food is simple, the freshness and honest flavours are paramount in each dish.”