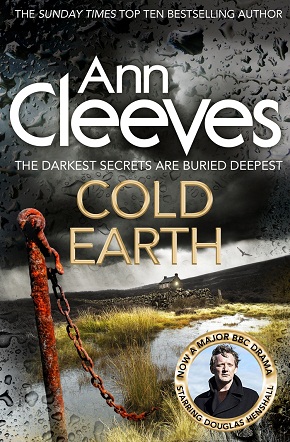 Ann Cleeves is the author behind the successful series, Vera and Shetland, broadcast by Multichoice (DStv) on ITV, which kept viewers glued to the screen. Shetland is Cleeves’s 30th novel and Cold Earth is the seventh to feature the Shetland Isles and detective Jimmy Perez.  While Perez is burying his old friend, the reclusive Magnus Tait, who has been a fixture on the island for many years, the rain triggers a landslide causing havoc and destroying everything in its path including what is believed to be an uninhabited croft.  Then the body of a woman wearing a red dress is found in the debris and it later emerges that she was dead before the landslide slammed into the croft. Perez for some inexplicable reason is drawn to the woman: perhaps she shares his Mediterranean ancestry. And he is determined to find out who she is and why she was murdered.  The only clues are two black and white photographs and a letter addressed to Alis. Everything else has been destroyed in the mud. The woman’s death spreads its shadow over the Shetland residents who are suspicious of each other, especially the Hays: Gilsetter farmer Kevin and his wife, Jane, a recovering alcoholic, and their two sons, Michael and Andy, back from Uni and who live near the croft; a womanising councillor and lawyer Tom Rogerson,  psychologist Simon Agnew who reportedly was the last person to speak to the dead woman at a counselling session at Befriending Shetland, a charitable trust and the Hendersons, owners of a holiday resort, and their son, Craig, who at one stage was a tenant at the croft.

Perez and his colleague, Sandy, are getting nowhere in their investigation and call in C.I. Willow Reeves from the mainland to help.

But Perez and Reeves both want more than just a working relationship. Reeves had an unusual childhood and she’s an even more unusual policewoman. They’re both conflicted but Perez more so: he is still grieving after the death of his wife, Fran, and he has been made the guardian of her young daughter, Cassie. There are numerous red herrings, not a few suspects and all the characters are fully fleshed out and all too human. Cold Earth is a cleverly plotted story. There is enough tension to keep you reading until the small hours, and guessing, until the killer, the person you least expect, is unmasked.