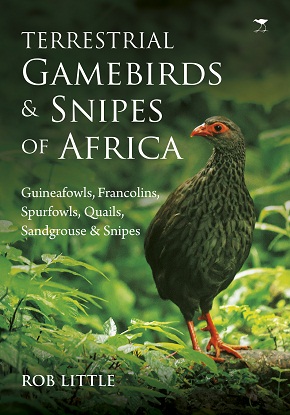 We’ve often seen guineafowls and francolins strutting on the side of the road and darting in and out of the bushes. But do you know which is which? There are various species (7) of guineafowl and, according to Rob Little, they differ from one another mainly in the colour of the naked skin on their head and eyes; in the colour of other facial structures and adornment and in the cackles they make to announce their presence. Guineafowl can be seen everywhere, even in the city, and on the urban edge. There are 13 species of francolin including the Crested Francolin and Orange River Francolin, the Grey-winged francolin which is prevalent in South Africa and was apparently first sighted in the Cape of Good Hope in 1790, and four of partridges: Barbary Partridge and the Udzungwa Forest Partridge, for example. The Greater Painted Snipe and the African Snipe are common sights in South Africa. But despite its name the Common Snipe is not.

The volume is divided into six chapters: Guineafowls & Congo Peafowl; Francolins & Partridges; Spurfowls; Quails; Sandgrouse; Snipes & Eurasian Woodcock and the sub-sections include a Distribution Map for each species; the Classification; Description; Distribution and habitat; Habits; Food and feeding; Breeding; Status and conservation as well as a comprehensive glossary and index.

There are numerous full colour images sent in by bird photographers from across the world. The 60 photographers  sent more than 950 pictures and their names are listed at the front. The cover image of the Mount Cameroon Spurfowl

was provided by Hadoram Shirihai.

Little who has a BSc in Wildlife Resources and a PhD for his study on the Grey-winged francolin has written a hugely interesting  book which is largely free of jargon. It’s a twitcher’s dream come true.