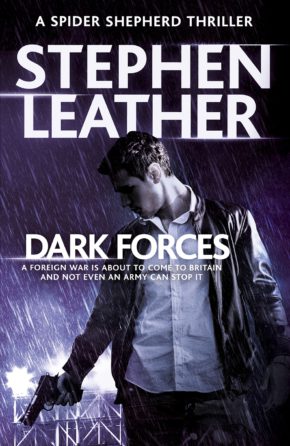 Daniel “Spider” Shepherd has his hands full.  The MI5 undercover operative has to bring down the O’Neill family, the gangsters who rule London’s underworld and stop a group of Islamic State jihadists which include a sniper from causing havoc in the British capital and he also has to deal with his son Liam who wants to drop out of university.

If you’ve been in La Land and haven’t come across Shepherd yet, he is a former SAS sniper with an eidetic or photographic memory which is useful for his work with MI5. As Shepherd points out, he never forgets a face

The story opens with Spyder in Syria where he watches the Islamic State sniper, Muhamad Al-Hussain escape a drone attack. Then posing as a hit man back on home soil and to prove his credentials to the O’Neills he dispatches Laurence “Larry” McGovern, who was trying to muscle in on their territory. Shepherd’s handler is Jeremy Willoughby-Brown who wants evidence to put the O’Neills  behind prison. But then he sends Spider to a refugee camp in Turkey where MI5 has a sleeper agent in place. The agent has information about a Turk selling fake identities to jihadists who are smuggled into the UK and is prepared to hand over the names in  exchange for protection and money. Spider’s photographic memory comes in handy and after successfully completing his mission he returns to London and the O’Neills. While Spider is at a boxing match with them he gets another call from Willoughby-Brown about a pending terrorist attack. The action goes up a gear or two and the hunt is one for the sniper and the other jihadists who planning to detonate bombs across London in a well-executed plan.  Shepherd and his team are in a race against time to thwart the plot that will have devastating consequences. This is the 13th book featuring Dan Shepherd and Stephen Leather has written another cracker that will grip you and keep you guessing until the last page.