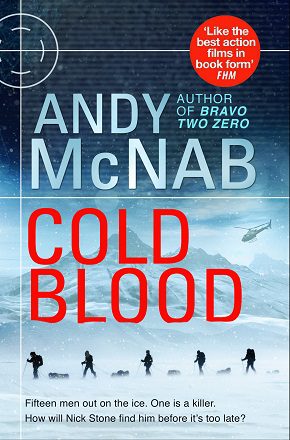 Nick Stone, a former SAS operative, is coerced by his ex commanding officer, Reg Cauldwell, who has set up a small security business, to accompany his son Jack and four other disabled ex-servicemen on an expedition to the North Pole, in the hope that they’ll regain their dignity and self-respect. But Cauldwell who has apparently raised the finance for the trek doesn’t believe that Jack is capable of completing the trip and there is no father-son bond. He doesn’t want Jack to know that he’s the moneyman. The men are missing arms or legs and all have been affected mentally by the brutal war in Afghanistan. Stone’s wife Anna and their son Nicholai, were killed in Russia where the three of them had been living so he accepts the close protection job to help him escape his misery and forget the demons that are plaguing him. What better place than the freezing north, far, far from civilisation as we know it.

Stone meets the veterans at the world’s most northerly airport, Langyearbyen, where polar bears are common and it is illegal not to carry a gun for protection against the ursines who often attack the humans. But that’s not all Stone and the ex-soldiers have to worry about: it’s the hard-as-nails Russians and the Norwegians, who are accompanying the expedition to ostensibly measure the effects of climate change in the area. However, nothing is what it seems: all the players have their own agenda and secrets, not least Cauldwell who avoids answering Stone’s questions. Eventually the expedition gets under way, thanks to Stone, who has a fortune stashed away and pays for everything.  Then when the two Norwegian guides are killed and the team members are put aboard a giant ice-breaker it is clear that the murderer is among them, or is he? Then there are more questions about the real reason for the trip. To reveal more would be a spoiler. But there’s action aplenty and some hair-raising moments. McNab is well known for his blockbusters and Cold Blood the 18th book featuring the fearless Stone is no exception. It’s a blistering read with blistering language but it is not out of place in the context of the setting. There is gore aplenty, violence and betrayal and Stone has to defuse a crisis that could easily set off another Cold War. McNab has had an unusual life: he was found in a carrier bag on the steps of Guy’s Hospital in London; he waged war against the IRA in South Armagh and as member of 22 SAS he was at the centre of covert operations on five continents, for starters. McNab writes from experience which is why his Stone thrillers are so realistic.