Research has proven that having friends helps us live longer and healthier lives; they help to counter stress and they improve our general happiness and mood.  Which is why you cannot miss Riaad Moosa & Friends at Emperors Palace on Saturday, 25th of March, 2017. 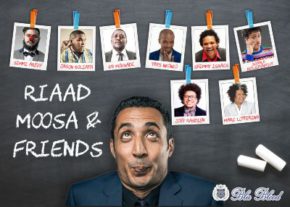 With this royal flush of SA comedy giants, this is guaranteed to be a show of hysterical proportions.

As an award-winning comedian, actor, writer and presenter, Riaad Moosa is one of South Africa’s most popular and acclaimed funny men – and he happens to be a qualified medical doctor too.  He certainly seems to have the remedy for the nation’s ills – a healthy dose of laughter, straight up – and hold the aspirin.

Jason Goliath is larger than life (it’s all because his big personality won’t fit into a smaller body).  His infectious energy and laugh has made him one of South Africa’s most sought after comedians.

Affectionaly known as KG, Kagiso Mokgadi takes the audience on a unique comedy journey with a glimpse behind the scenes into his life as a son of a Sangoma and a nurse.

With a stack of awards, accolades and achievements under his belt, Loyiso Gola is a comedic force not to be taken lightly.  He is best known as the host, co-producer and writer of the Emmy-nominated satirical news show, Late Night News with Loyiso Gola.

Hailing from Cape Town, Marc Lottering is one of South Africa’s top comedians.  He has been in the industry for over 16 years and he continues to keep audiences in stitches across the country and abroad.

Schalk Bezuidenhout, the talent as sweet as mother’s milk and with a skop as powerful as brandy, is not your run-of-the-mill comedian.  His refreshing approach to comedy explores his conservative upbringing and his current liberal outlook on life.

The only female on the line-up, the hilarious award-winning Shimmy Isaacs looks at her journey as a confused coloured woman who comes into contact with all sorts of cultural dilemmas of her own race and others.

Simmi Areff was rated one of the top up and coming comedians in the country.  Go ahead and ask him!  This much-loved comedian started his career while completing his journalism degree.  Having toured extensively around the country, Simmi’s witty tongue-in-cheek comedy has made him a strong contender in the industry.

Get your prescription of laughter with Riaad Moosa & Friends as they take hilarity to the next level on Saturday, 25 March at Centre Court, Emperors Palace.  The show is rated PG16.  Tickets are available from R185 per person and can be booked through Computicket or at the Emperors Palace Box Office.  Emperors Palace is located at 64 Jones Road, Kempton Park, Johannesburg.

Another great production brought to you by your friends at Blu Blood and Emperors Palace. You’re welcome!  After all, what are friends for?