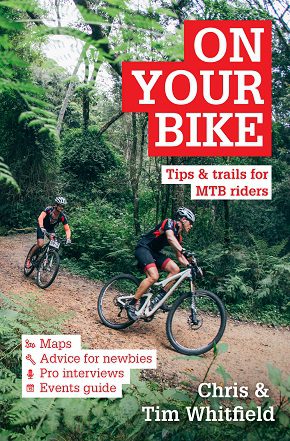 Have you met the “head boy”? The “Trail Dude”?, the “Trail Dud”? Or “The Yapper”? It is jargon unique to the Mountain Bike (MTB) fraternity. The Yapper is the rider who turns every stage into a three-hour monologue; the Trail Dud  roars ahead on the uphills and then slows to a crawl down the trail and jumps off when he sees a stone and pushes, causing a “looong stream of riders behind him enormous frustration”. You can see them on the trails, write the authors who answer most of the questions you want to know about mountain biking and trails but were afraid to ask, to mangle a phrase by Woody Allen who wrote the classic, “Everything You Wanted To Know About Sex But Were Afraid To Ask”.

Subtitled, Tips & trails for MTB riders, it is packed with useful information including getting started; a history; what type of rider you are or want to be, and of course, the best trails in the Western Cape; KwaZulu-Natal; Gauteng and further afield Mpumalanga; Lesotho and Swaziland, to name some.

The Harkerville Red Route, the gold standard, in the Southern Cape, is 19km from Knysna and 13km from Plett: another interesting trail is Homtini, on the higher slopes overlooking the seaside town. There is a host of other trails in the Western Cape including on Table Mountain; Welvanpas near Wellington; Grabouw and Elgin.  In Gauteng you can challenge your MTB skills on Braamfontein Spruit; Groenkloof and Modderfontein and in KwaZulu-Natal there’s Howick; Sollie’s Folly and Karkloof.
All the trails highlighted in the book have degrees of difficulty and you can decide if you’re up for the challenge.

There are chapters on safety and equipment; a guide to safe and responsible riding and info about the well-known races which include the Absa Cape Epic; the Imana Wild Ride, the original stage race and the Sani2C.  And then there is a handy guide to MTB lingo, not to be confused with the jargon. The images are by Craig Kolesky.

If you have only a passing interest in mountain bike racing or are an expert then On Your Bike is for you. It has been written by people who have  been there, done that and got the T-shirt, not to mention some bruises and broken limbs. Chris Whitfield was the former head of Independent Newspapers’ Western Cape division and he has completed the Absa Cape Epic four times. Tim Whitfield was the national sports editor of Independent and is an accomplished veteran biker who organises the Hill2Hill race in KwaZulu-Natal and is also a former South African national canoeing champion.