On 12 March a group of kykNET actors and presenters will join seasoned athletes to take part in the Cape Town Cycle Tour, the biggest cycle race in the world. 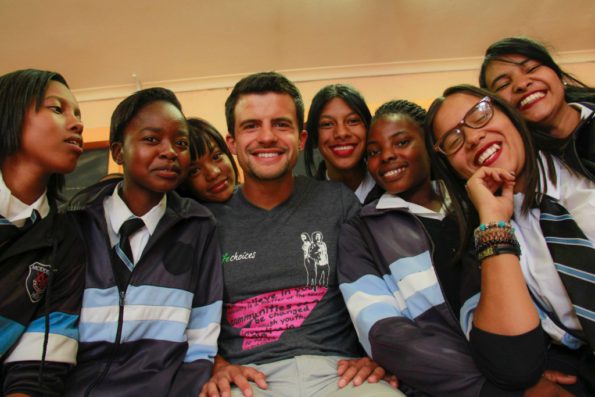 Marco Spaumer (25), one of the stars from the popular Afrikaans soapie Suidooster, will be riding the 109km for Salesian Life Choices, a social enterprise that works with young people in townships around Cape Town.

Marco has never taken part in a cycling race before and since receiving his sponsored bicycle two weeks ago, he’s been practicing at every opportunity. “I’m not a cycler, but I do quite well with spinning at the gym. I now try to complete at least 30km every morning before going to work.

“The roads where I stay in Milnerton are quite flat, so over the weekend I made an effort to conquer the steep hills around Stellenbosch. It was grueling but awesome! Over the two days I did 131km and I’m feeling more confident that I can beat Chapman’s Peak on 12 March.”

Over the past few weeks Marco has taken part in some of Salesian Life Choices’ initiatives, getting to know the communities who benefit from free services in terms of family stability, health, education, leadership and job creation.

After spending time with Grade 12 learners in a Bonteheuwel school, Marco said he was “amazed” by the commitment and care he witnessed in the Leader’s Quest programme. “The coaches and mentors are guiding the kids through the emotional rollercoaster of finishing the last two years of high school, helping them make the right decisions,” Marco explains. “I love getting to know the learners, they are so passionate and eager to grow into amazing human beings.” At one school four of the top leaders of the school – the head boy and girl as well as the deputy head boy and girl – participated in Leader’s Quest in Grade 11.

Marco, who plays Tim du Plooy in Suidooster, moved from Gauteng to Cape Town last year to star in the kykNET series. He’s also known as a presenter of the magazine programme Bravo on kykNET. His friend Danilo Acquisto, who is a presenter of Afternoon Expresso and Good Hope FM, introduced him to Salesian Life Choices. “Danilo is on the board of directors of Salesian Life Choices and when I told him I was looking for a charity to support for the Cape Town Cycle Tour, he invited me to visit the organization’s office in Landsdown.”

Marco soon realized that Salesian Life Choices isn’t a conventional NPO. “Their motto is ‘choices not charity’ because they believe in empowering vulnerable youth to make the right decisions. It’s not about hand-outs, it’s about giving young people a hand-up.”

Being a role model to these youngsters is a privilege that Marco takes very seriously. As a soapie star he gets recognized whenever he goes out in public, but he doesn’t see it as a nuisance. “It gives me an excuse to talk to strangers. I love listening to their stories.”

A visit to a Family Affairs session in Phillipi made a deep impression, Marco says. “It was so inspiring to see how Salesian Life Choices showed the women skills and ways to love and be kind to themselves, so that they can love their families and children.”

Marco says his granddad, who completed four Argus races, is an inspiration for the Cape Town Cycle Tour. “He told me to watch out for cramps. If you get a cramp, you’re out. He also advised me to be saddle-fit – four or five hours on a bike you’re not used to is torture for your bum!”

In spite of the possibility of some uphill suffering, Marco is confident that the Cape Town Cycle Race will also be fun. There is a healthy competition in the kykNET group, especially between the actors from Getroud met Rugby, Binnelanders and Suidooster. “We have a WhatsApp group and people are constantly sending photos of how they’re preparing and bragging about how far they have cycled.”

One advantage of preparing for the Cape Town Cycle Tour is that Marco has a good excuse to eat more. “If I exercise a lot, I tend to lose weight, so now I eat four to six meals every day to stay buff for the cameras,” he says with a big smile.

Every one of the cyclers in the kykNET team will be competing to see who can raise the most money for their charity of choice. Marco hopes to finish the race in under four hours, but he doubts he’ll be the first rider of the kykNET team across the finishing line.

He is however, confident he’ll reach his target of raising R15 000 for Salesian Life Choices. “I know there are a lot of people out there who want to support young people in challenging circumstances to make the best of their lives. If you make a donation towards this cause, you can be certain your money will make a real difference.”