A distillery for modern times 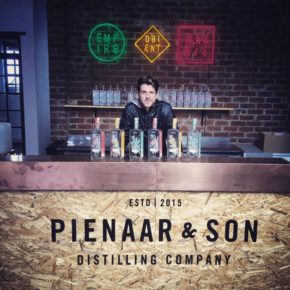 “The spirits industry needs a shakeup because they’re all saying and doing the same thing.”

That’s according to Andre Pienaar, a 29-year-old distiller and musician whose latest venture is designed to take the pretentiousness out of the spirits we drink.

Pienaar and Son is the newest offering in the South African alcohol market: a brand devoted to delivering on its promise of delicious, quality spirits.

Pienaar launched his first range of gins at the end of 2016, beginning with a fresh citrus and cucumber combination (EMPIRE), and a sweet orange, vanilla and eastern spice variation (ORIENT). These flavours have already been picked up by prominent and speciality gin bars and liquor stores in Cape Town and Johannesburg, as well as bigger outlets such as Solly Kramer’s Norman Goodfellows Wines and Spirits, and a smattering of Tops! at Spar outlets around the country.

Later this month, Pienaar aims to launch his own take on a classic vodka, giving it a handcrafted spin that elevates the tasting experience.

He is rare: both a creative with a flair for expression and a scientist with an eye for detail.

In the past, Pienaar has channelled his energy into both hemispheres, studying chemistry at university before going on to front the band Ashtray Electric. Seven years and three albums later, the indie musos had racked up an impressive medley of hits, headlined festivals such as Rocking the Daisies and Lente Dag, as well as opening for international acts such as 2 Door Cinema Club, not to mention a SAMA nomination to boot.

“I realized that with Pienaar & Son I could be creative with my recipes and scientific with the resulting product.”

Pienaar and Son is housed inside a charming building in the Cape Town CBD.

Andre is the son in the moniker. His father, Schalk Pienaar, is a chemical engineer with over 40 years of experience in distillation. Schalk designed and built the equipment inside, which is utterly bespoke.

“Most distilleries will have similar, if not identical equipment. Our column still is a 3-piece maverick you won’t see anywhere else,” Andre Pienaar says.

Opposite the 3-piece still, a sign reads Start a Tradition, something that defines that brand at work.

“There’s this notion that tradition is a byword for quality,” Andre says. “In reality, older is not nesecarily better. All of our technology is moving forward. As such, distillation methods are improving all the time and it would be foolish to not exploit that.

Indeed, every alcohol brand markets their offering the same way, and the message is misleading.

“Double distilled? What does that really mean?” Pienaar adds with a smile. “It says to me that you weren’t happy with the distillation the first time around, or your equipment is incapable of doing it in one distillation run.”

Modern distilleries, through a complex chemical process, distil the alcohol we drink one-thousand times over in that single run, rendering the age-old adage meaningless.

While prominent alcohol brands largely buy neutral alcohol in bulk and then infuse it with flavour, Pienaar makes everything from his small distillery, first by buying and cooking local corn, converting the starch to sugar and allowing the corn to ferment.

He keeps a close eye on process every step of the way. “It’s not as if I can pop out for coffee.” After all, steam is pumping through a pressurised vessel at 105 degrees while three pumps are continuously circulating boiling hot liquid.

All the same, he welcomes tastings by appointment and relishes showing people the inner workings of a small, local distillery.

Pienaar hopes that his frank, straightforward approach to his work cuts through the pretentiousness that surrounds so many alcohol brands, and wants to do things a little differently.

Going forward, he has his sights set on a hearty whiskey, a South African take on the dutch Jenever and applying the finishing touches to his vodka.

“There’s the opportunity to be really creative in the way we talk about spirits. It just doesn’t need to be tradition this, heritage that.”

Getting to the heart of youth culture appeals to Pienaar. Still only 29, he has his sights sets firmly on championing the mantra that sits boldly inside his workshop.