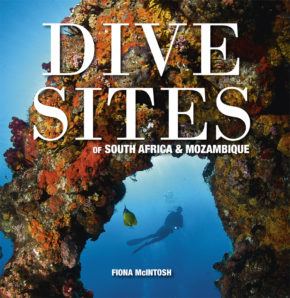 This book highlights some of the best dives around and there are many to choose from including along the scenic Garden Route and in the Southern Cape. The author quotes Pieter Driessel, PADI (Professional Association of Diving Instructors) regional manager for South Africa and Mozambique as saying that some of his best dives have been off Plettenberg Bay. This chapter also covers the Overberg town of Gansbaai which is best known for its shark cage diving, you don’t need a diving qualification to do this, and nearby, off Danger Point, is the wreck of the  HMS Birkenhead which gave rise to ‘the women and children first’ protocol. You can also see the Great Whites at Mossel Bay. There’s also a snorkelling and scuba trail in a sheltered bay at the Storms River mouth. You may be lucky and spot the rare seahorse in a mucky dive under the Thesen Island jetty, part of the SANParks reserve. Other sites include the Paquita,  the Drift Dive, both near the Knysna Heads and Jacobs Reef off Plett, to name some. Dive Sites has 13 chapters covering the Cape Peninsula and False Bay; Southern Cape; Eastern Cape; South Coast; Durban; Sodwana Bay; Northern Maputaland; Southern Mozambique; the Manta Coast; Vilanculos; Nampula, Northern Mozambique, and points in between, and Inland Dive Sites which include Wondergat, 60km from Lichtenburg and Sterkfontein Dam, a relatively new site, near Harrismith, a three-hour drive from Johannesburg.

You can also go shark and kelp diving at the Two Oceans Aquarium in Cape Town, where you can swim in the kelp beds and with enormous kabeljou and apex predators (sharks). One 1.6-million litre tank is home to rays and striped bonito as well as the kabeljou.  The 2-million litre tank houses the predators, which at the time of writing is closed for refurbishing; the kelp tank, 800 000 litres,  will also be closed for refurbishing once the predator tank is open again, around Easter. However, you do need dive qualifications to take part in this adventure, which is probably “the easiest dive in the Cape”. And on that point just about anybody can learn to dive, children as young as 10 can enrol in a Junior Open Water Diver programme.

A warning: diving is not without its dangers especially from the denizens of the deep. Although the chances of getting bitten by a shark are miniscule, other  dangerous marine life include the stonefish which is a master of disguise; stingrays; fire coral, and the ubiquitous jelly fish and bluebottles. So if you are aware of your surroundings you shouldn’t come to any harm.

It’s a comprehensive guide with first hand descriptions of 180 of the best dives; site maps; key dive information; contact details for dive centres and a detailed marine species identification guide.  You will find useful tips for each location, when to go, what to wear as well as short summaries of nearby dive spots. This full colour volume is  must for any diver, whether you’re a novice or a professional. Don’t leave home without it.