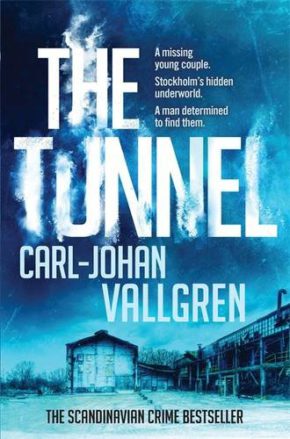 If you enjoy Scandinavian authors such as Jo Nesbo and Camille Lackberg, the creators of Detective Harry Hole and crime writer Erica Falck respectively, then you will really like this thriller featuring private investigator Daniel Katz, former junkie and also an IT expert.   It is the second featuring Katz, the first was the Boy In The Shadows, and there are quite a few references to it in The Tunnel, which is a standalone. But to get a better sense of Katz’s past it would help to read the first book.

The Tunnel is a cleverly plotted thriller with many layers. It begins when Zoran meets his old friend Jorma who 20 years ago used to commit crimes together. Zoran has gone straight while Jorma has quit the life of crime and he has saved enough money from previous jobs not to have to do break-ins again. But Zoran has a proposal to ambush cash-in-transit company after a tip-off from an employee and that’s the reason for the meeting and to talk to Hillerstrom, the middleman. Jorma and Katz are long-time friends from when the investigator was a junkie, who after the death of his parents in quick succession, Jewish immigrants from Sweden, took his revenge on the world by turning to drugs and fighting.   Another tie to Katz’s past is Eva Westin, also a former drug addict, but now a lawyer and one of the best prosecutors with the Economic Crime Authority.  And Katz turns to Westin for help after finding his former drug dealer, Ramon, dead and his artist girlfriend, pornographic industry Jenny, missing. Katz wants to know where Ramon got the money to buy his stash of heroin that he is distributing. Katz is also digging into his Jewish roots and meets an old friend of his late father’s where he hears some amazing stories. Katz’s search for Ramon’s killers takes him to some dark, dark corners of Stockhpornographic industry where the perverted carry out their sexual fantasies and are involved in a syndicate run by a dirty cop. And it is not a spoiler to disclose that. The threads all come together in a satisfying but most unexpected climax where the secrets of the Tunnel are laid bare in all their horror. It’s a white knuckle read, it’s unpredictable and nothing is what it seems. I was sorry when it ended. I’m looking forward to the next Daniel Katz thriller and I’m going to try to track down a copy of The Boy In The Shadows.