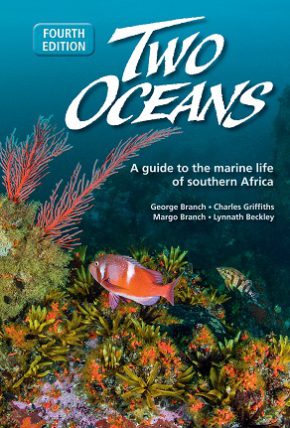 A guide to the marine life of Southern Africa

For more than 20 years Two Oceans has been the go-to book for scientists, students, divers and beachcombers who have turned to it to identify and learn about marine life in our two oceans. This is the fourth edition and has been expanded to include an additional 116 species and updated list of the distribution of 57 species. There have also been 235 changes to scientific names to keep abreast of modern taxonomic trends.  The authors say that Southern Africa (for purposes of the guide) stretches from northern Namibia to central Mozambique and has more than 13 000 species of marine fauna and flora or almost 60% of all coastal marine species known world-wide.  The authors have focused on areas that are readily accessible to beachcombers and scuba divers: intertidal zones; estuaries; dunes; beaches and shallow waters.

The book is easy to navigate and apart from the scientific names is free from jargon. The descriptions are short and to the point and you will have no difficulty identifying the various species of coastal life – whether it’s a shell, a sponge, seaweed, a Barehead goby – or a whale.  And if you think that dunes were just enormous piles of sand: think again, they are teeming with plant life including Bristly love grass, Candelabra lily,  April fool and Soldier-in-the-box, to name some.  The images (on the right hand pages) are clearly numbered to match the text (on the left hand pages) to make it easy to identify the various species.

There is a glossary to help you tell the difference between an Acontia and zooplankton; references; a comprehensive scientific index; a general index and an alphabetical general index.

The authors are internationally acclaimed scientists and they provided most of the images in Two Oceans. Take a copy with you to the beach next you go just for a stroll or to dive to make the visit for more fun. A copy of Two Oceans should be in every school library and on your bookshelf at home. It will be well used, guaranteed.