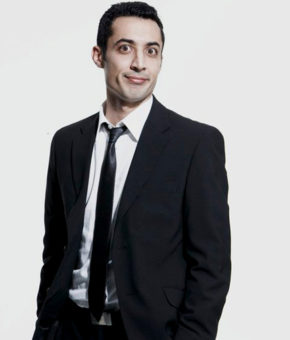 Riaad Moosa invites along audiences around South Africa to his brand new one-man show, Life Begins, to join in figuring out whether life really does begin at 40.

“Even though I am turning 40 this year, in many ways, I feel like I’m still crawling and I’m looking back at my journey from being an aspirational doctor, coming from a relatively conservative Muslim background, where both my parents were doctors, and how I actually journeyed to becoming a stand-up comedian,” says Riaad.

As an award-winning comedian, actor, writer and presenter, Riaad Moosa is one of South Africa’s most popular and acclaimed funny men and he happens to be a qualified medical doctor too.  Known as the “Comedy Doctor”, he certainly seems to have the remedy for the nation’s ills – a healthy dose of laughter, straight up – and hold the aspirin!

Life Begins is a snapshot into the life of Riaad Moosa – being a father of three kids, a husband, comedian, actor and with all the current cultural and political issues thrown in.

The show has seen sold-out audiences at the Golden Arrow Studio in Cape Town – with the run ending on 25 February – and due to popular demand, an additional week from 2 to 6 May has been added to the Baxter Theatre.  Riaad will also be visiting The Ridge Casino (Witbank) on 4 March; Patidar Hall (Lenasia) on 10 March; Silverstar Casino (Krugersdorp) on 11 March and 25 March at Emperors Palace with Riaad Moosa & Friends.

“The show is very philosophical and existential.  It involves the normal issues of getting older while at the same time experiencing, at a maturity where I’m supposed to be wise, a world that is completely turned on its head – with Trump, with Brexit; In South Africa, the ‘State Capture’, ‘Fees Must Fall’, ‘DOOM’.  And it’s about how I negotiate all these things happening around me while trying to maintain a positive attitude.  Through my comedic lens, I hope to put a different spin on that and hopefully I can enter my next 40 years with renewed vigour and excitement,” Moosa adds.

The show is rated PG for Language.  Tickets range from R150 and can be purchased at Computicket or at the respective venues’ box offices.  For more information on Riaad’s upcoming shows, visit www.riaadmoosa.co.za.