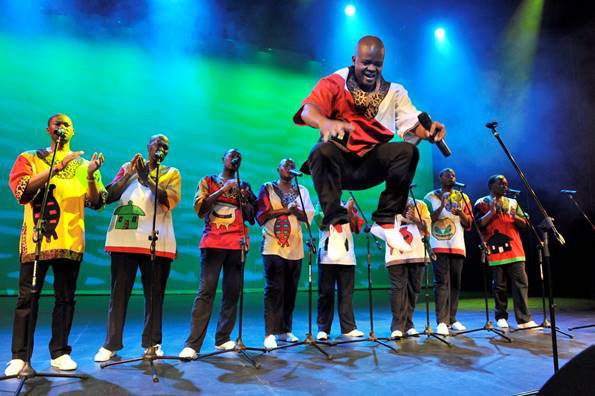 Chris Kreef , festival director says: “We are bursting with excitement for this year’s ATKV Oesfees, our tenth anniversary festival. The news that Ladysmith Black Mambazo will be performing on our stage completes our very exciting line-up of original South African roots musicians. We honour the farmworker families each year for their massive effort and the love with which they bring in the harvest. This year we’re going the extra 10th birthday mile with more traditional food trucks, more fun for kids at the SafeKidZone and more beautiful, happy South Africans of all walks of life having the best time of their lives.”

Ladysmith Black Mambazo, led by founder and leader Joseph Shabalala, has been making joyous and uplifting music for over 50 years. This renowned a cappella vocal group has created an extraordinary musical spirit that has touched the hearts of audiences worldwide. Within their music are the intricate rhythms and harmonies of their native South African traditions. Their musical efforts have garnered praise and accolades from a wide body of people, organisations and countries over the past five decades. Their most recent album Walking In The Footsteps Of Our Fathers, was nominated for a Grammy for the Best World Music Album 2016. This marks Ladysmith Black Mambazo’s 17th Grammy Award nomination. They have been awarded the Grammy Award four times; in 1988 for Shaka Zulu; in 2004 for Raise Your Spirit Higher; in 2009 for Ilembe and in 2013 for Singing For Peace Around The World.

Ladysmith Black Mambazo performs abroad regularly and have recorded with numerous international artists, including Paul Simon, Stevie Wonder, Dolly Parton, Sarah McLachlan, Josh Groban, Emmylou Harris, Melissa Etheridge. Their film work includes a featured appearance in Michael Jackson’s “Moonwalker” video and Spike Lee’s “Do It A Cappella”. A film documentary titled On Tip Toe: Gentle Steps to Freedom, the story of Ladysmith Black Mambazo, was nominated for an Academy Award. They have appeared on Broadway and have been nominated for Tony Awards and have won several SAMA Awards and a Drama Desk Award. In more recent popular culture they have been part of shows such as The Family Guy and the movie Mean Girls.

The ATKV Oesfees at Solms-Delta, Franschhoek, will be celebrating another year’s successful wine harvest. Join the workers of the valley, along with thousands of other music, food and wine lovers to share in the joy of a diverse cultural event, featuring some of the finest home-grown musicians, as well as some of South Africa’s most popular artists and bands.

Another exciting addition to the line-up is The Rudimentals. They will be performing alongside the stellar roots line up including The Music van de Caab acts that will be performing at the ATKV Oesfees: the Klein-Handjies Pre-school Choir and the Kaapse Klopse-style walking band, Langbroeke; a female choir ensemble Die Soetstemme; the Delta Valley Entertainers and the Lekker Lekker Delta group. Top South African talents who will be sharing the stage include Radio Kalahari Orkes, Manouche, Nick Turner, Hezron Chetty, Riku Lätti, Bacchus Nel, Jackie Lätti, Hannes Coetzee, The Papier Familie Band, Akkedis, Les Javan, Hemelbesem and Yoma, Brain Cloete, Churchil Naudé, Die Wasgoedlyn, Tribal Echo and the African Jazz Pioneers.

An annual ATKV Oesfees highlight is a performance by winners of the ATKV Riel Dance Final. The Betjies from Betjiesfontein were the winners of the ATKV 2016 Riel Dance competition in the junior category and will take to the stage to entertain with their impressive footwork, also on stage will be previous winners the Nuwe Koue Grastrappers.

This year marks a very special occasion as the ATKV Oesfees reaches its 10th year milestone. Traditional food and excellent wines from the Solms-Delta farm will be on sale. There will be a special area for kids, managed by a professional events company, Cre8tive Kids. Children are registered and are looked after inside a specially fenced, safe area. They can look forward to playful activities all day.

Come join the special people of Solms-Delta for this annual gathering filled with thanksgiving and good cheer.

Kids under 2:
Free entry: Babies also get tagged so that the organisers have an exact count of all the festivalgoers.

ATKV Oesfees 2017 in collaboration with kykNET, RSG and Boschendal.