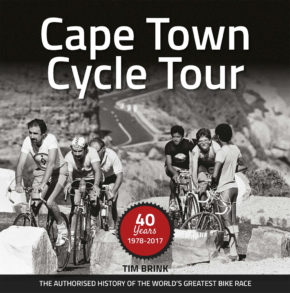 The Authorised History of the World’s Greatest Bike Race

The Argus Cycle Tour as it was then known in 1978 attracted 525 entries. Fast forward 39 years later to 2016 and the iconic event which is now called the Cape Town Cycle Tour, after several name changes, and reportedly one of the biggest timed bike races in the world, drew 37 199 riders.  The tour was the brainchild of engineer Bill Mylrea and John Stegmann, an architect, who were discussing cycling and cycling safety for the small number of recreational cyclists in the Western Cape. And what was needed was a safe and expanded space for the riders but none of the authorities was interested and not even a 3 000-signature petition could persuade the Department of Transport to even consider the idea. Until Mylrea and Stegmann together with the newly formed Western Province Pedal Power Association (today the PPA) organised “The Big Ride In” to show just how many people rode bicycles. Hundreds turned up but even that didn’t move the transport department who saw no future for bike paths.  Out of the spectacular failure of The Big Ride came plans to stage the gruelling Peninsula Marathon – but that also failed to gain momentum, until well-known potter and legendary mountain biker Steve Shapiro in 1978, who was working at the Argus at the time, persuaded the marketing department to get involved. And again it almost didn’t happen, and even though the Department of Sport loved the idea it had to be for “whites only”.  Mylrea wrote to the sports department stressing that it was a non-segregated event and this at a time when BJ Vorster and PW Botha had the country in their steely apartheid grip. But the spirit of cycling and inclusivity won out and on October 28 1978 over 500 cyclists left the start line outside the Castle in Strand Street.  From the beginning the tour set new standards; for the first time novice riders could compete on an even footing with the professionals. The first male home on that day was Lawrence Whittaker in 3:02:24 and the first female was Janice Theis in 4:35:00 but she came back the following year and cut her time by an hour. Compare these times with the front-runners in the 20th edition of the race. Malcolm Lange finished 105km in 2:39:25 and Anke Erlank did it in 2.58:27; the youngest rider was Hermanus Jordaan (5) and the oldest rider was Brian Warner (85).  The “authorised history” is not just a book of statistics, there are some interesting facts, more than 1 000 images, personal memories and the in-depth story of each of the 39 races.

The Cape Town Cycle Tour also gives some intriguing glimpses into the past: In 1979 the chart topper was My Sharona by The Knack and showing on the silver screen was the Deer Hunter which won five academy awards while Jon Voigt (best actor) and Jane Fonda (best actress) won the Oscar for their roles in Coming Home.  Almost 35 000 riders entered the 21st edition of the race. Celine Dion led the charts with her My Heart Will Go On, which was quite apt in the circumstances. The Oscar for the best picture went to the Titanic and Helen Hunt and Jack Nicholson won the Oscars for best actress and best actor respectively in As Good As It  Gets. In 2016 best picture was Spotlight and Leonardo DiCaprio won the best actor Oscar for The Revenant. In 2014 Nobel Laureate Nadine Gordimer died and Malaysia Airlines flight 370 disappeared over the Indian Ocean, Dr Pallo Jordan turned out not to be a doctor and Rolene Strauss became Miss World.

Many celebrities have entered the Tour which raises thousands of rand for charity, through the Rotary Club of Claremont, which is when the “event really hit its straps”, according to David Bellairs, who has been involved in the event for many, many years. The now disgraced Lance Armstrong was an entrant in 2010 and Bellairs’s recollection of the day and the rider makes interesting reading.

Since the event started all those years ago 219 288 cyclists have completed the race. The 2017 edition of the Tour was scheduled for Sunday March 12 but was cancelled because of the strong winds.  Tim Brink, who entered his first race in 1983 and finished 30 tours, is editor of Ride,  has written a fascinating history of the Tour through its ups and downs, through good weather and bad, the lows and the highs. Get this book even if you’re not that interested in cycling. And if you are it’s a must. You’ll want to dip in to it again and again.