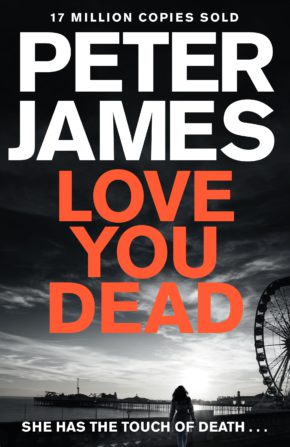 Jodie Bentley, Jodie Danforth and Judith Forshaw are some of the aliases the “black widow” of Brighton uses when she trawls the dating sites looking for her next victim, rich elderly men who are on their last legs, hoping to inherit their fortunes after she kills them. The case lands on the desk of Detective Superintendent Roy Grace when a doddering multi-millionaire Brighton art dealer, Rowley Carmichael, dies in suspicious circumstances at a crocodile park in India and Shelby Stonor, a small-time thief and burglar is bitten by a snake.

Jodie is a venomous piece of work who has had a life-long passion for reptiles, mainly the poisonous variety. She was an ugly duckling and her parents were always comparing her to her beautiful sister, Cassie, who died after “accidentally” falling off a cliff while the family were on holiday.  As a teenager Jodie’s dream was to be rich. Now, after plastic surgery she is a wealthy, stunning and sexy eligible woman, who has killed more than once.

Walt Klein, an American millionaire is her first victim.  Or is he? Jodie met him in Las Vegas and shortly afterwards they were married. On their skiing honeymoon in the Courchevel he takes a wrong turn and falls to his death and Jodie is hoping to inherit his fortune. But she is in for a big surprise. Klein is under investigation for running a Ponzi scheme, almost as big as the one initiated by Bernie Madoff. And she is left to pick up the pieces and foot the bill for Klein’s coffin and transport to New York. At a loose end while waiting for her plane back home to Brighton she picks up a Romanian gangster, Romeo Munteanu, who tries to rape her in his hotel room. But she overpowers him and steals a suitcase packed with $200 000 and a USB memory stick. Back in Brighton she asks the shady Graham Parsons to unlock the memory stick which she learns contains vital information about Eastern European and Russian organised crime members in the US. While married to Klein, Jodie had been corresponding with Carmichael, who has one foot in the grave.  And when they meet at a Brighton hotel it’s love at first sight. Stonor dies of a snakebite, and Carmichael is “bitten by a saw-scaled viper” while he and Jodie are on their honeymoon. Both deaths are suspicious. Jodie’s first husband, Christopher Bentley was a herpetologist, and when he died, also of a snakebite, she inherited his collection of venomous reptiles, spiders and scorpions which are now in vivariums, in a secret room at her Brighton home. While Grace and his team are investigating the deaths, news comes in that notorious serial killer, Dr Edmund Crisp who shot Grace (You Are Dead) before making his escape through a tunnel, is in French custody. Meanwhile Tooth, an American hitman, who escaped by jumping into Shoreham harbour after a fight with DI Glenn Branson (Want You Dead), is back in town, this time to recover the goods Jodie stole. These are the three sub-plots that tie up neatly. All the familiar characters from James’s other Grace thrillers feature prominently: his nemesis, ACC Caspian Pewe, whose life Grace saved; Branson; Norman Pottinger, is still grieving for his fiancée Bella Moyes who died while trying to rescue a family in a house fire (Want You Dead) and Grace finds out why his first wife, Sandy, who was declared dead, left him. And he can finally lay her ghost to rest which has always threatened to become between him and his second wife, Cleo, and their young son, Noah, who is fast growing up. Love You Dead has all the classic James elements: unexpected twists; dogged police work; experts including a forensic podiatrist, astute pathologists and dedicated policemen and women. It is the human touches that help to elevate the Grace thrillers above the rest. There’s the dog, Humphrey, who is always game for a run in the mornings, Tooth’s associate, Yossarian, and, of course, Marlon the goldfish who has been with DS Grace for 10 years, swimming round and round and round in his bowl. Love You Dead is a satisfying thriller.