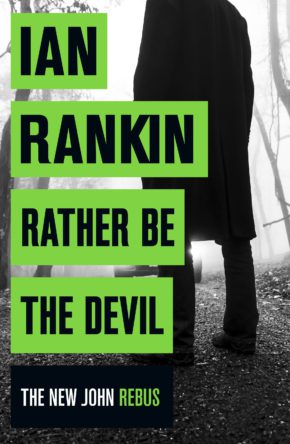 Edinburgh police inspector John Rebus might have been forced to retire but he’s far from out. So to distract himself and take his mind off his ill-health, he gets involved in a cold case – the murder in 1978 of  wealthy socialite, Maria Turquand, who was strangled in her hotel room while anticipating the arrival of her lover. Meanwhile Rebus is waiting for the results of an x-ray that showed a spot on his lung which he refers to as Hank Marvin of the Shadows (geddit), proving that he has lost none of his dry wit. He takes his girlfriend, pathologist, Deborah Quant, to the Caledonian Hotel, where Turquand was killed all those years ago.  Rebus has given up smoking, and for the last seven days he has been cigarette-free, although he is dying for one last one. Unaware of his health issue, Quant gives him a specimen of a diseased lung to show what can happen to smokers. Rebus is interested in the Turquand case because a musician, Bruce Collier was there with his band, Blacksmith, playing a gig when the socialite was strangled. Collier has returned to Edinburgh and has a house nearby the Caledonian. Rebus borrows the file from DI Siobhan Clarke, who needs help on another matter involving young Darryl Christie, who is trying to take over from retired gangster Big “Ger” Cafferty. Christie has been beaten up and left unconscious outside his house, and Clarke thinks Cafferty may be responsible. Rebus has long had a bond with Cafferty who tells him to look for a Russian. Her Majesty’s Revenue and Customs (HMRC) has been keeping a watch on Christie, which is why DI Malcolm Fox, formerly of Professional Standards, who has been promoted to Gartcosh, the elite Scottish Crime Unit, is also on the case. Much to Clarke’s chagrin because she wanted the promotion herself.  Meanwhile Craw Shand, an alcoholic and drug addict, confesses to beating up Christie, and the police believe him because he has information that they haven’t released yet. Then a link is discovered between Christie and Anthony Brough, son of the banking family for whom Maria’s cuckolded husband, John, was working for at the time of her death. Rebus, Clarke and Fox unravel all the tangled threads of the investigation which has numerous twists and turns and includes more murders, kidnapping and money laundering. The canny inspector unmasks Maria’s killer in an explosive climax. And it seems as if Cafferty can’t stay retired for long. Rankin is at the top of his game with Rather Be The Devil. I think it’s one of his best featuring Rebus whom he created about 30 years ago and in that time Clarke, Fox and Cafferty have matured and taken on a life of their own. Rankin has written 21 novels featuring Rebus and each one gets better and better. You can bet we’ll be hearing more from Rebus and his team soon. If you haven’t read a Rebus thriller now’s the time to start. You won’t be sorry.